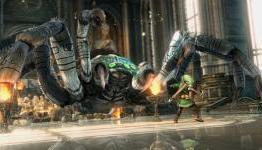 The Future Of The Wii U

What does the Wii U have in store for us? What challenges will Nintendo face in producing it? We take a look into the Wii U’s future before they showcase it again at this year’s E3.

Adhttps://www.releases.com/?utm_source=n4g&utm_medium=native&utm_campaign=c1
- Comments (26)+ Comments (26)
TopNewestOldest
Expand all
The story is too old to be commented.

I'm sure the future of the WiiU will include the pointless restriction known as region locking.

Lol, true. I never understood why companies do that.

But hey, look at the bright side. Nintendo will offer retail games for digital download, so if there's some game only released in Japan, Nintendo won't have to worry about localization and they can just put it up for download.

Win-win situation. We get the game with the better japanese voice-overs, and Nintendo doesn't have to ship physical copies, meaning there's no risk in low sales.

There are quite a few flaws with that. Biggest flaw is with what your suggesting the games would still be in be handled by western publishers. So any game they don't want to bring to the west (say a publisher believes a game might be controversial in the west, or ones that the publishers believe, as Sega once put it, "Too Japanese").

I'm not sold on the Wii-U as of yet...I want Nintendo to deliver with social features and to step outside of their comfort zone and build some new franchises/characters..bring out some mature themed ips while they're at it...Nintendo needs to come out strong and really try to challenge Sony and MS...

To be fair, it's the fans that demand Mario/zelda/pokemon etc.

And it shows. Even after 25 years it's selling great. Meanwhile they have made new ips.

The Future of the WiiU?

So, let me make sure that I understand. This is an article that won't really be relevant for atleast another 7 months?

bring some new resident evil titles for the wii u, and i will be sold.

I'll be sold on the Wii U, the second Nintendo give it a proper controller.

No, i mean the proper controllers Nintendo consoles had before the casual junk.

CC PRO and all wii controllers are fully compatible with the wiiu.
Just grab a wii remote and plug in a ccpro and BOOM..."normal" controller.

At least, unlike sony and Microsoft, Nintendo is giving you more options. And don't expect that dual shock or move wand to work with the ps4... dualshock which has had to be re purchased for each PlayStation despite being the exact same design...

RE4 Wii is the definitive version of the game. COD games are funny to play with the motion controller to aim. Games like just dance are really fun to play with friends (physical friends, not online invisible friends). Motion controllers aren't bad at all, but I'm pretty sure you didn't even try one.

some of you guys online may not, but people around the world love when companies try things different with controllers, and they love their tablets for some weird reason.

The U-pad is no more gimmicky than the PS3 controller.

It's basically a regular controller but with a touch-screen in the middle, a headphone jack and a gyroscope. They're GIVING you more functionality on a controller that can otherwise play just about any traditional game you've played in the last decade.

Also the Wii U is compatible to the Wii's accessories, including the Classic Controller.

Let me see if I get this right: The vita has two sticks, buttons, a touch screen in the middle, and a gyroscope. Is it a gimmick console?

That's so funny and the best reply ever!

Very good comeback...bubble up for you !

I get where you are going, mamotte, but the PSVita is the screen and controller in one. Wii U tablet is the controller with an aid screen, you'll still be looking at the TV.

My big worry with the tablet is will it be easy enough to use that you won't have to take your eyes off the TV screen to use it? Current controllers have defined locations that are very easy to use. But, a tablet is a big device with more space and then you add in the screen with its touch capabilities. I worry about how useful it will be to me over a traditional controller as it applies to me keeping my visual focus on the TV in front of me.

Gimmick? That's to be seen. I won't jump on that bandwagon just yet. But, I do believe that the influx of tablets to the market did help Nintendo in deciding to make it.

Thats a handheld how else is it suppose to look and its suppose to have those features? I dont get your point. Let me get this straight wii u controller will be a handheld as well?! Awesome all this time i thought the screen would be aused as a gimmicky inventory screen like ds lol

Why is that the same excuse from everyone who has a problem with the touch screen?

The touch screen can also be a visual window into your game world. Did you ever see any of the demonstrations at E3 or CES? The possibilities are promising to say the least.

You can also play your game on the screen. I dunno about you, but that's a neat feature in my opinion.

so the advantages and features that handheld consoles have become a gimmick when you increase size? Still dont get your point.

That's a lame excuse, and you know it. Some "features" become "gimmicks" when you want to, uh?

Iwata said the core will be catered to first at the last Nintendo direct.

Wii u supports cheaper external HDD's instead of forcing you to buy overpriced proprietary drives (Microsoft anyone?)

Nobody knows the wii u future or how many controllers it will support. Wait until E3.

The article complains about the system not having a hard-drive. I am very happy with this and so should every other gamer who plans on getting a Wii-U. For one, it will keep the price of the console down since the hard-drive is not included. That is a win for all the consumers.

Second, I like having the choice of choosing if I want one or not. I should not be forced to pay for something I may or may not want. If casuals do buy the Wii-U, do you honestly believe they will use a hard-drive. They would care less about DLC, or having a full game stored in the system.

Plus the system is supposed to have some flash memory in it already....I don't expect a lot at all, but its not like if you buy the system you can't save your games or anything. Plus it has an SD slot, so there really isn't a concern for a lack of storage.

Next, for the people commenting about the controller..... saying a new feature is a gimmick without actually trying it out for yourself, and without seeing what developers have in store is just narrow minded. Core gamers said motion controls were a gimmick because they wanted them to fail, because they were afraid of change. Well tough, that "gimmick" is now a part of gaming forever.

But, if you feel a touchscreen during gameplay isn't for you, then great, either (A) don't use it or (B) don't buy it. But also don't buy a 3DS or a Vita, because again its now becoming a part of gaming like it or not.

And for those who can't seem to grasp how it could be used, lets try looking at things from a non gamer prospective. Picture turning on your Wii-U Tablet and being able to watch Netflix anywhere in you house (within range of the console). No more having to fight with anyone over the TV, being able to watch you movie in the bathroom, or just walking around while your doing other stuff in the house.

Or how about the Video calls. Let's say you want to call your best friend, you no longer need a cell phone or house phone. Just pick up your tablet and video call them. No worrying about house phone bills or using cell minutes etc. And now you can show off your new baby brother to a relative far away, or tell your best friend to hop on Call of Duty so you can bust his a$$. Or maybe even talk to your GF while playing a videogame without her feeling neglected.

Plus it has NFC capabilities. Instead of just having to pay for DLC, you can actually get something physical with your money. Let's say you buy the new Mario figure and link him to the controller, all of a sudden you get 5 new levels in Super Mario bros Mii. Or get the new Samus figure and you unlock her Zero Suit. At least you get something you can collect after, instead of just sending a game company your credit card number and getting your DLC.

Stop looking for the negatives and start looking at the potential. Will these things interest everyone...no,unfortunately you can't win over everyone. But at least attempt to look at what this machine can do and how it can change the way we intereract with a console.

I suppose the obvious next step is letting us to choose an external storage medium. Be an USB, HDSD, Portable HD... it'd be really great. Sadly, it'll allow piracy to impact WiiU sales (believe me, I live in Colombia. Price games are sadistic, It's even cheaper to import'em from USA, like I do, so piracy is a demigod in here.), but let's hope it wont be that much of a deal.

Oh, and about the casuals not buying DLC... actually, with some titles, is the other way. I play Just Dance on PS3 with a friend of mine, and... we're buying songs like crazy every now and then.

if wiiU come out with CONTRA,GRADIUS,R-TYPE,DOUBLEDR AGON,EINHANDER,G-DARIUS any kind of sidescrolling game
IM THERE Day 1.