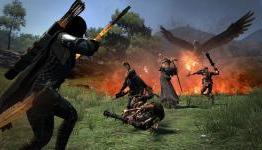 This game would sell so much better if it had multiplayer instead of the idiotic pawn system. That and the fact that on-disc DLC is already confirmed, I don't see this coming out well for Capcom.

pawns seems to be interesting system test it first, also the on disc thing are some small quest that will sold for 7 dollars on a game that you can cloak 100 hours or more that should not be an issue

it doesn't matter if they are for 99$ or for 10cents, i will gladly pay 7$ for an expansion pack(not some characters and few quests or skins..etc), which is made after the game is released (RDR nightmare) and not already in the disc and ask u to pay extra to unlock it ??! is this how they fight used games ?!
nowadays u pay 3$ to unlock a character, what would happen if they sell it for 20cents ? i mean millions if not thousands will download it and they will lose nothing (lets say u they sell u a boss fight for 3$ and lets say 100,000 people will buy it, do u think that much costs them to make this boss fight?) ? and come on, u rather buy for small maps or few characters for 15$ or buy a Journey which is a full game for ~10$ ?
am just sad and sick about the pricing of DLC and on disc locked content, and patches after patches to fix a game ?!
This is my opinion but maybe most of you won't agree with me (i know its business but these for dlc are not fair, and am not someone who can't pay but rather pissed at their prices, thats why i buy dlc for just a few games).

I'm interested in this game, but I need to find out more about it before I'm ready to make the plunge. I would have preferred if they had made the game one player like Skyrim and Amalur, the pawn system really looks like it was tacked on as an after thought just to include multiplayer.

I've been burned too often by Japanese developers trying to copy western style gaming, so I want to see how this game is accepted as well before making any choices.

Dragon's Dogma - Worthy of a Sequel a Decade Later