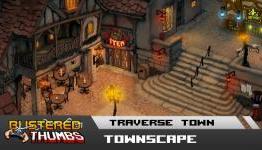 BT writes: Kingdom Hearts was a bit of an odd RPG that had you traveling to various worlds based on Disney films. You would fly around London with Peter Pan, swim under the Sea with Ariel, and crawl through mouse holes in Wonderland. It was a neat concept that lent itself to some pretty compelling gameplay. However, before you enter any of these worlds, you’ll first find yourself in whimsical area called Traverse Town.

Such a magical game. I wish I could take a pill that would make me forget KH so I could experience it all over again.

I started playing it for the first time last week on an emulator and I really like it.