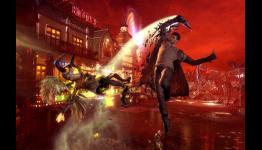 DmC: hands on with the new combat system

We go hands on with DmC and its new monsters mashing combat system. A lot of monsters died. It was fun.

Urgh...I forgot they are still releasing this

It looks terriable for a DMC game

I would be worried if I was Capcom, I bet they don't want to loose more money.

I honestly wouldn't be surprized if Capcom payed reviewers to give it a good score to secure it's success.

"and give Ninja Theory the mainstream acclaim it deserves"

Why...for being arrgonat arseholes who have called the old DMC, it's creator, the fans and everything about the old Dante.

Yeah they deserve it alright /s

Yes we get it...if you will never give this game a try, why even post this?!

Not 60fps, but it looks and runs great.

Because Vanilla bear is a troll that goes into ALL the DMC articles just to complain. Its ridiculous really.

I'm really not interested in this game after all BS talk from NJ...

U know whats funny. Ninja Theory already said they intended to make dante look like the old dante, but capcom said no. They wanted a new one.. This was capcoms decision.

I need a link for that. As far as I remember Capcom said nothing of the sort, and all the derogatory remarks concerning old Dante came straight from NT.

YOur absolutely right, it was Capcoms decision. And theyve talked about it more than a month ago. I remember back two years when they first showed that concept trailer (back when I actually hated the game)they had like a 30 minute long interview discussing why dante looked so different. Im to lazy to find the link @nolifeking, but as they say...google is your best friend =)

To show my support, I will buy this game 2nd hand once it has hit the bargain bin.

What are the chances of Crapcom having original Dante as a DLC character?

I have grown from loving Capcom (PS2 Era) to hating Crapcom (current gen). They have destroyed all which is good through greed, ignorance and arrogance. NT and Crapcom are made for one another.

I'm not saying this game is bad, all i am saying is I wanted a Devil May Cry game and what I have been given is knock off product with a brand label stuck to it. Since it is a knock off, I wont give my money to the publisher or developer.

Its like beating a dead horse with you guys and the whole capcom is greedy this and they suck this gen that....

I mean dont get me wrong we are all entitled to our own opinions but Im old enough to remember capcom back from NES and super NES days (dont know if your that old) and to be honest they arent really doing anything different now that they hadnt done back then....well...except for contracting western game developers. This gen is really nothing new, its just that Japanese games are starting to show their age and the developers either cant adapt or dont want to.

I mean you guys DO know there are like 50 billion different versions of street fighter 2 dont you? Lol. Now they just call it DLC.

Aaahh another old school gamer like moi. I have been gaming since I was about 7 I think making it 23 years of gaming.

I do remember Capcom from them days and I remember the many iterations of sf, sf2, sf2t, sf2:ce, sf2:hf, ssf2, ssf2t etc

The reason why I blame them now more than before is because of the following:

1) in those days, the games industry was not as big as it is today. Things were very different and the gaming industry was slowly coming up. You could forgive Capcom then as they were releasing arcade and console games with fans always wanting the arcade version in their homes, hence the many versions and releases.

You can also argue there was an innocence about it as everyone was excited as the arcade culture was different. Fans didn't care as long as they got a new edition in their homes and Capcom was happy doing this. There was synergy!

2) It was difficult for developers to hear the out cry of fans and their opinions etc so it is again difficult to blame them for not hearing us.

3) technology has changed, gaming trends have changed (arcades have died down dramatically and consoles have taken over the main bout) and beat em ups have changed. I'll give you an example below:

In terms of content and replay value, SF gives the least for your money. Fans have pointed this out over and over but it has fallen on deaf ears.

RE has turned into an action game.

DMC has been destroyed (looks like a great game but not a DMC game). They could have easily made it a new IP.

Standard things are being turned into dlc such as colours and vs modes.

Yes, not much has changed in terms of milking, but before they had an excuse, but now they don't. Now I can argue that they are ignoring their fan base, ignoring gamers and choosing to milk the shit out of anything they touch.

Ignorance and arrogance is also key to this. Not once have they looked at rival beat em ups and said, "shit guys. These lot are releasing tons of free content for free. Considering fans are complaining about the milking of their teats, shouldn't we stay competitive and also give more content?"

might seem a bit like a rant, but in the end you can't exploit people who pay your wages and hope they remain loyal and keep funding you. Eventually you will be left on your own.

This will be a great game as i enjoyed HS more than DMC4.

DMC4 was garbage & that was from Capcom. This DMC is actually an improvement from that trash.

UMMMMMMM yeah thats garbage lol. I mean yes that video sure makes it look cool but:

1)Nero was still a whiny punk

2)Nero only got two weapons the entire game (three if you count Yamato...I dont)

3)The Story was pretty lame and didnt explain anything, in fact it added nothing to the devil may cry universe except more questions like who is Nero and why is capcom adding characters to the Sparta bloodline that the original creator of DMC didnt intend on being there.

To each his own I guess, but the first DMC was the reason I bought a PS2 back in the day it was special...DMC 4 however was just....stale.

And I have to agree with Kurylo3d bellow took the words out of my mouth the series seems to get cornier and cornier with each new game after the first (3 was still fun but it was mad corny)
I dont know how I feel about this new one but ill give it a shot.

Im going have to agree with the fact that dmc4 was garbage. The gameplay was hot, but the story was just corny.. it seems like it gets cornier and cornier from dmc1. Least dmc1 felt grounded in the real world, even if you were half demon.

8 Underrated Original Game Soundtracks That Could Pass As Mainstream Music

Why are Capcom so good now?