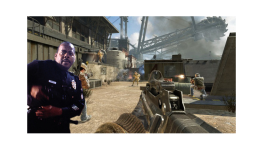 According to Treyarch, Black Ops II Doesn't Need a New Engine - I Stand to Disagree

The Call of Duty series receives a lot of flack year after year, and I'm as guilty as anyone else (but I believe I'm in the right, because I think Call of Duty has been a big heaping pile of manure since Modern Warfare 2). No matter if Treyarch or Infinity Ward is behind the latest installment, we hear countless criticisms against every new title every Fall, but I have to believe that many of these criticisms are warranted.

They could use an older build of there game engine and people will still buy it, why spend more money if you know theres gullible people out there?

i absolutely understand and respect your point

R* could've used the same ps2 engine to gta IV and V and still sell millions, but there is something that called respect, mutual respect

Is it that they do not wish to improve their engine or is it that their publisher controls their overall actions?

This can be seen as the devs not thinking the game needs to be improved graphically or that Activision wants to make for for less; until sales lower then they do what they can to increase sales again (engine upgrade).

Well look at how their system is being run. They usually have two years to develop a game. Unless they did take a multi year hiatus to reboot there is no time to do more than upgrade a bit along the way.

Even worse since treyarch was stated as helping out with modern warfare 3 they may arguably have had less time to work full force on black ops 2. They likely only used part of the team on mw3 but it is what it is. In order for activision to buff infinity ward up to normal running levels after most of the team left they had to cannabilze their other devs. If mw3 had failed it would have killed their series with bad pr.

With what they have shown of Rockstar's engine for Max Payne 3, GTA V will be incredible.

People seem to like it...a lot of people. What I don't understand is why people hate it. I don't play the game so I don't know.

I will still buy it with or without a new engine. As long as it looks good (which CoD looks decent enough) and is fun (this is where CoD shines for me) then it warrants a purchase. Heck, it is running at 60 frames per second. I would rather them spend time fine tuning and balancing than a whole new engine. I love CoD the way it is.

You are the brick wall that prevents real innovation from succeeding.

Settling for "decent enough" is what keeps these games' developers from moving forward gameplay-wise, let alone upgrading their engine. These devs have been "fine-tuning and balancing" since 2007, and I've known people who have hated the game for years now but keep buying it because they are unwilling to try anything new or different.

Give me a reason as to why they need a new engine other than graphics. Go on, tell me how getting a new engine for black ops 2 will make the game more enjoyable.

I think Treyarch needs a new publisher as well. lol

Their stories are a breath of fresh air in the COD series as they are not IW.

I believe they are capable of so much more.

Activision is using COD to hold them back.

They could use a brand new engine programmed by aliens with notepad, using all the power from a super computer, and the game will still be the same. What's the point, then?

well at this point no need arguing for a new engine
when using the same old hardware.

save the new engine for next gen.

Why would they need one?

This will be marked as trolling.

most likely because people are jealous how bf3 new engine looks...also i like cod right now more because on bf3 they are renting servers to people so if u get in a match and kill the host alot than they can kick u for that..so yeah for now i dont care how cod engine is as long as they dont start something like that....btw duke nukem is not even worth mentioning....so umm i got a ? pm me for answer should i get max payne 3 or wait for future soldier next week

BF3 graphics is ONLY good in PC. It did nothing to improve anything on consoles for both Xbox360 and PS3.

is fine the way it is, its never been about graphics for COD games. The game play getting stale is what I am concerned about. I have and always will take game play over graphics

Why CoD needs a new engine:

- The graphics have seen little improvement

- The audio is terrible

- They run at sub hd resolutions

We've been putting up with their current joke of an engine for far too long.

Gimme that Treyarch, Infinity Ward, and Activision, and THEN I'll play. No guarantee I'll BUY- still need to get rid of quick scoping, poor map design, bad hit detection, and horrible spawn mechanic, too- but I'll at least PLAY then.

Trey arch are activisions puppets. They will say all the right things that will please activision. In this case they are saying their engine is good enough which makes activision happy because it's less they have to spend or worry about. Big corps love puppet slaves like trey arch

Btw, mw3 has some of the uglier graphics I've seen this be and black ops has the worst audio

So this articles argument boils down to "old = bad."

Why? "Because cats" I guess. It's never explained why an old engine is bad... the article only claims that it is.

The closest the article comes to explaining its point is to claim that if you start with an engine that's utter shit and then make a barely half-assed attempt to update it then it still isn't good enough. No shit? Next you'll tell me a gold painted turd is still worthless... who knew? But see.. the problem is that, true though the statement might be, it's a statement with no relevancy to the current discussion. It's a straw man argument.

The Modern Warfare engine is not utter shit. I personally don't like the CoD series but the games made with the Modern Warfare engine have remained popular and the graphics are not really flagging all that much. So the claim that they are starting with "a run-down mobile home" where the "plumbing is busted" is absurd. More like they are starting with a classic Victorian home from the early 1900s. You know... the kind people pay millions of dollars for.

And the insinuation that updates to the engine are being half-assed is not supported by the article all.

tl;dr version: the author of this article is a moron.

Tl;DR version of this comment, Jormungandr missed the point of the entire article.

Uhm...? What? You're saying the point of the article is *not* that the CoD series needs a new engine for its upcoming games? Cause everything about the article, including it's title, is nothing but repeated claims to that exact effect.

If that's not what it's about then what *is* it about? Knitting?

It's not that it doesn't need it, it's that it's not possible or a smart decision to make a new engine for such old consoles.

Trolls need to do some research and understand that the PS3 and Xbox 360 are aging harware. It's not possible to have amazing graphics at 60FPS. Yes, 60FPS does matter. Smart developers will always put gameplay above graphics.

This article is actually inaccurate. The engine running CoD is 13 years old. All the CoD games (IW, 3ARC, Sledge) are built on a modified id tech 3 engine (Quake 3). Taking that in to consideration the engine looks pretty good.

The key thing to consider though is the ~60fps the game runs at on both consoles and how well it runs on mid-low level PC's. Yes, it's "sub-HD" in it's native console resolutions, what multi-platform titles aren't though? (inb4 internet rage nerds linking this http://forum.beyond3d.com/s...

Consoles have old ass GPU's in them, you can't expect miracles. There was an article posted here recently that discussed the effect the frame rate / speed of CoD has on the gameplay. The jest being it feels faster and more responsive, which makes sense. I spent years playing Q3 (still do occasionally) and the twitch speed of that game hasn't really ever been matched because it's in the engine. Even id tech 4 and 5 didn't do it.

I love the hell out of BF:BC2 (PC and PS3), BF3 (PC) and have recently gotten hooked on MW3 so it's not a fanboy argument. The cards running PS3's and 360's are different architecture (DX vs OpenGL) and ancient by GFX standards. Hell the DX support on 360 stops at 9.0c. Why build a new engine

The id tech 3 / Quake 3 engine runs amazingly on either architecture. What's the point in them building a new engine for cross platform support at this point? Hardware on consoles is going to change, hopefully soon. In the interim, they can do iterative upgrades to the current one and maintain the "feel" of the series in it's current incarnation. Changing engines now would lead to the drastic differences in quality BF3 exhibits.

Of all the things to bitch about with this series (Michael Bay story lines, slowed innovation in MP, hacking, Map Pack prices, etc...) the engine should be pretty low on the list.

It does what it do. No more, no less.

It needs a new engine for next gen. When the next gen systems arrive and if this game still looks the same it won't be a good look for the franchise.

The author of this article is one idiot stupid moron. The engine is continuously being enhanced and the developers even said that there are no more remnants of the old if tech engine. It is now heavily upgraded or modified and that is why they call this their own engine 'BOP engine'.

If you really think that any game can develop a cut above the rest or way better graphics, my question is what game? Nothing. Quality of grphics in all best games look identidical. BF3 is only good in PC, and this requires a high end PC at that. BF3 on consoles did nothing to improve. Check the limitation of the console hardware, you pin head writer.

They went from COD 4 through Wack Ops 2 and prob MW4 with doing tweaks here and there to their engine claiming they have to in order to keep their precious 60 FPS fast paced gameplay. Well what excuse will they and their fanboys use when their games still look crappy on next gen hardware ? When alot of the games then will be constantly making their games better from title while theyre stuck in the graphical mud. Reality is they dont care, its all about gettting the next COD game ready for November and thers nothing wrong with that, just stop making excuses about why your game is the way it is. Its a FPS Madden.

Infinity Ward teases "A new generation of Call of Duty"