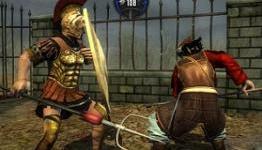 DHGF: For $30, players get both games, a $25 value, plus all DLC released for both games, which starts the savings for those who never picked up either downloadable version. As a bonus for those who know they enjoy the titles, more than 30 new weapons have been implemented and a new graveyard stage is exclusive to Ancient Combat. When you consider the disc version gives you more for your money, the series becomes more attractive to first-time buyers.

diehardgamefan.com
- Comments (0)+ Comments (0)
TopNewestOldest
The story is too old to be commented.
50°