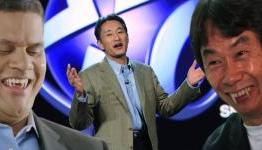 Publishers patent certain aspects and technology in their games all the time but the average gamer generally doesn't think about that particular aspect of the business much, if at all. However, there exist some pretty interesting and almost unbelievable patents when researched, and as such, GP Editor Jared highlights four insanely specific video game patents in this article.

gamepodunk.com
- Comments (36)+ Comments (36)
TopNewestOldest
Expand all
The story is too old to be commented.

This get's me wondering if Microsoft patented the Cross Game Chat feature.

Well, I doubt it, because the vita has that, I think.

I mean on Consoles.

Its probably like with what they said in the article. Sony has found a way "round" it IF Microsoft has patented cross game chat.

The more people who have access to this feature the better. Communication makes multiplayer games so much more enjoyable :)

The Vita is a console, it's just handheld. And even if it wasn't, there's no way they would patent the tech on just the one platform. When you patent technology, you want it to be as broad as possible while still getting the patent. Also, the patent can't just cover an idea; it has to cover a technique. There's more to a patent than just saying, "I want to patent the first human powered helicopter.". You have to actually show how the tech works, and THAT'S what gets the patent.

EDIT: you'll also note that the article doesn't even reference the patents. How do we even know if the patent is being correctly paraphrased?

EDIT 2: just read the patent for the Crazy Taxi arrow. It's a patent for a method of determining vectors and updating the display accordingly, along with possible applications. *yawn*. There are a ton of games that determine vectors....stupid to assume that Sega holds the patent on Math.

Pekolile says "Communication makes multiplayer games so much more enjoyable" and so far more people have disagreed with him than agreed?... Whaaaaaaa..? Explain yourselves!

unfortunately we will never know as these people would obviously rather not speak to anyone and will likely never reply to us.

why are Reggie and Miyamoto vampires?

I had a different image set up for the title where Miyamoto was a vampire and attacking the character from Haunting Ground. Then I realized I had a brain fart and that Haunting Ground was the wrong game. Instead of getting rid of Vampire Miyamoto, I added in Vampire Reggie and had them attack Kaz Hirai.

Fifa has a mini game on the loading screen and that's made by EA.

And that one with SEGA's big arrow is ridiculous. You can't patent the ability to point to things with an arrow. Or at least I didn't think you could.

I think EA would call it a practice loading screen.

If I recall correctly then even Bioshock has a arrow pointer which shows where the way to next objective is. Dead Space does it in a better way by actually marking a line to the way of the objective.

so that is why i cannot listen to music i always thought it was amemory limitation thing.

Thanks microsoft you jerks
how can they patent something ive done for years on my pc? its ridiculous

Other than in racing games I have no use for listening to my own music in game.

In most games the music is part of the experience and was specifically crafted for each part of the game, putting some other soundtrack just spoils the atmosphere.

And in most multiplayer games I want to hear what's going on around me, I don't want guitars screaming in my ear.

I know what you mean. Racing games I can understand but for other games I want to hear what is going on and it is part of the experience.

Yes! I totally agree. I think it works well for fighting games too. Not always, but sometimes yes.

I guess you have not played Bayonetta...the music in that game sucked turtle nuts.

Microsoft got the idea from PS1 where you can load up your game and pop in your own CD for the music.

Eff you in the A, Microsoft! (As if I didn't feel that way already.)

You actually can on some games, just found this nifty link b/c I was curious how many - http://community.us.playsta...

Isn't very up to date though.

thanks for the link im already aware of a few games like killzone 2 and little big planet but i would have liked all games to be able to play music.

Actually knew about these except for the insanity meter.

I always wondered why I couldn't listen to music while playing KZ3 or Battlefield 3, now I know. M$ are always looking for ways to screw over none X360 owners with crap like this. That's why I finally gave in and bought a X360... Second hand ;-)

Interesting, I wonder what other patents there are out there.

The patent system is an absolutely joke, almost as much of a joke as the family court system.

Both need to be obliterated out of existence.

Ok lets say you spend 10 years on 100,000's of dollars on how to make cars run on sea water and you finnaly figure out the system to make it work then a jerk comes along and just copies your idea and makes millions of it.....would you still feel the same way?

Well of course in that example the guy should be protected, but the way it's stands now is that too many companies are exploiting the numerous loop holes in the system.

devil may cry 3 and another ps2 game has a mini game on its loading screen.

o well why does ps3 hasnt any unique stuff to patent?

This doesn't piss very many of you off? It really should; companies shouldn't be able to do this kind of shit.

i play my own music while playin super street fighter 4 though, it not on the ps3 itself game devs have to put it on the disk and its done. NOT ALL GAMES GO GOOD WITH MUSIC quietness is needed sumtimes.

Ever since Apple began it's patent war, I'll be believe anything ._.

AN4G is not just for new info on video games. It's a site for articles about video games/gaming related subjects. Which includes news