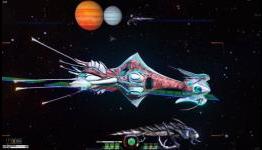 Kerberos Studios has released an update for galactic conquest game Sword of the Stars II: Lords of Winter. Game owners can download the update now on Steam. This update expands on the ship retrofitting added in the previous update by allowing stations to also be retrofitted. It also includes many other fixes and additions.

gamingdead.com
- Comments (0)+ Comments (0)
TopNewestOldest
The story is too old to be commented.
30°

Sword of the Stars II: Enhanced Edition Out Now