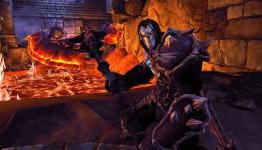 If you've spent any time reading comics in the past few decades then the name "Joe Madureira" should sound at least remotely familiar to you. The man behind reviving the X-Men has been one of the driving creative forces for one of THQ's most anticipated sequels, Darksiders II. Having dabbled in both the comics and video game industries, Joe Mad has a unique perspective on both, as well as the creative process that drives each of them. We recently had a chance to get his thoughts on comics and games, as well as a look behind the curtain of Darksiders II.

multiplayerblog.mtv.com
- Comments (1)+ Comments (1)
TopNewestOldest
The story is too old to be commented.

Great interview, I want the next comic!

The Art of Darksiders II Hardcover Edition gets release date

David Adams talks about Gunfire Games and future of Darksiders

Gateway Games To Get You Into RPGs