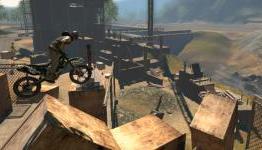 Trials HD is one of the best-selling Xbox Live Arcade games of all time, it has sold over 2 million copies, and it was voted Best Overall Arcade Game in 2009 by Xbox 360 players. The physics are great, the levels are lovingly crafted, and the replay value is enormous. Saying that Trials is a motorcycle trick game isn’t exactly disingenuous, but it’s not telling the complete story either.

snackbar-games.com
- Comments (0)+ Comments (0)
TopNewestOldest
The story is too old to be commented.
20°