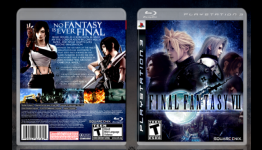 WildCardCorsair writes: I'm sure you all are quite aware of what world we're living in. The new generation of children are so used to technology that they need constant entertainment. You think this would not really affect the game industry in a negative way, being that games are a form of entertainment, but you'd be wrong.

Obviously Dark Sniper is of the popular opinion that Final Fantasy VII should be remade. But this article delves deeper into another issue that definitely warrants discussion.

Gamers around Dark Sniper's age bracket will likely be able to identify with what he's saying. Once upon a time, there was an age where 100% of all gaming was done offline. Younger gamers these days should be appreciative of the fact that all of their gaming news can be found through the ease of the internet. Back then, Dark Sniper had to wait for his monthly issue of EGM Magazine in order to stay up to date on the latest games and information. Compared from then to now, is a gigantic difference.

That isn't the real issue, the issue is that multiplayer gaming has completely shifted the way we play video games to this day, excluding the more popular genre of JRPG's that dominated during the SNES,PS1,PS2, and Sega Saturn eras of gaming.

Dark Sniper has been gaming since the Atari 2600, so it's very easy to view this from a jaded, one-sided point of view. But he can at least identify the fact that younger gamers wouldn't waste their time on long, epic journey adventure titles with outdated graphics when they could be taking their time leveling up their K/D ratio on Call of Duty. Not that Dark Sniper agrees with any of this, but that's just how gaming is these days.

As gamers, we're a society divided, we're at a time where gaming back then was more underground than it is mainstream. There's old-school gamers and there's new school gamers. Many would agree that if you were born in the 1990's, you missed out on an ENTIRE epidemic of great games that will never be duplicated again.

Thankfully, digital distribution has been great in preserving a lot of classics from that time period. But it will never be able to re-create the magic that gaming had during that timeframe.

When I read your comments, I imagine them being spoken by a robot.

I agree. Sometimes I feel like Dark Sniper has multiple accounts because it always seems that whenever someone says something slightly negative to him (it?) they receive a bunch of disagrees...

Plus he spams; constantly advertising.

Ikr, his posts look and read like a big advertisement. Idk if he has multiple accounts but I'll find out. I have ways of doing that.

He's a real street fighter fanatic from Texas, that's for sure.

It reminds me of that Seinfeld episode of that character Jimmy who always talked in the third-person.

"Jimmy did pretty good out there."

This trademark is something coolbeans digs. 8)

I was born in 1991, and played all through NES, SNES, N64/PS1. So, other than that last bit there about 90's gamers missing out on those great games, I agree with your comment. Though it's not just us old school gamers that should give some slack to the new generation, they need to be just as giving. We need a mix of developers making old school inspired things, as well as ones who make stuff for the newer generation.

Dude, why are you commenting in third person?

It's his M.O. Every comment he makes is in the third person.

It's annoying, isn't it? It makes me a little embarrassed to be on the same side (PS3 user) as him.

By the way, most gamers are adults so the demographic is not children/teenagers. They're playing CoD. There have been studies confirming it. Just google it if you're interested. I think I heard about it on an IGN podcast.
Anyway, I was born in the ninties and I was a kid when Final Fantasy came out on PS1. I never tried it. Now I want a remake so I can see what all the fuss is about. I do not want to play the current version because at that time, people saw it differently. I want to see it uprezzed so I can see it in your eyes.

SE would just fuck FF7 so i dont want any FF7 remake.

Kids aren't the target audience, and they probably don't have the money to buy the game anyway. Who cares what they want?

Money drives the industry and the target audience is irrelevant. only the paying audience matters. Megaman Legends 3 had a target audience but capcom did not think the game would make money so they pulled the plug. The Last Guardian is all but cancelled, and it'll be a miracle if we see that anytime soon. i wish it wasn't this way, but it is.

Kids would likely not be the paying audience either.

Oh look, it's the boxart that I made. Regardless of that, I'd say I wouldn't want an FF7 remake either. Or should I say.. rather than having those resources go to an FF7 remake, I'd rather see them go towards a new game/project.

good job with that box art!

So does that make me a kid, then? I've zero interest in an FFVII remake; has the age range for "kid" just jumped up to nearly 30? Even though I've been gaming (hardcore) for 15 years, am I not old school enough?

Well the thing is...while this article makes a point or two, the fact that Final fantasy 7 gets mentioned, talked, and even written about pretty much tells you that even if the kids dont know about it, chances are they will curiously look into it.

The fact that this article is even written is a clear indication of how successful a final fantasy 7 remake could be.

Final fantasy 7 isnt just a fan favorite, its a classic that help the genre grow during the crash, and metal gear slash tomb raider and resident evil days. GTA only really took off during the ps2 era, anything before that was almost ignored, (except by the pc croud) but enough of that now.

Call of duty is not the only franchise with success.

Look at skyrim, or any of those games for that matter. Kingdom hearts still sells pretty well and I am sure if the game is remade people will buy it.

The only real reason why such a remake isnt considered is because of money and time. A game of this scale would take a lot of man power and time, thus rendering their (squarenix's) yearly releases.

People waited almost 5 years for GT5 and it still sold a boat load regardless of the scores. Same for some other games. I dont expect final fantasy 7 to do call of duty numbers, but atleast in japan the thing will do monster hunter numbers.

When a company tells the public that they hear and undertsand that they want something, its because is that relevant, its that important.

Final fantasy 7 is by far their biggest final fantasy to date. The spin offs, petitions, movies and even its characters are iconic more so than any others. Not being a fan, just calling it like I see it.

what are you talking about?

Final Fantasy 7 was not released during any sort of Video Game crash? Gaming has done nothing but grow every generation since 1985. Super Mario Bros. was released after the crash and basically saved gaming.

My opinion is that it should not be re-made until the game can visually look like Advent Children during game-play, after people have seen AC i'm not sure anyone will accept anything less.

Other than graphically I do not wan't too much changed, I want the battle mechanics(ATB and Summons) easter eggs, background art (yes please don't do any 3D camera crap just do what Lost Odyssey did with the fixed camera and pre-rendered environments), Materia system and preferably Voice acting from AC.

the script will have to be re-written because a lot of that stuff just wouldn't work when voice acted.

I wouldn't mind a FFVII-2 either.

Bro, I meant crash' as in crash bandicoot? Not crash as in the video game industry crash, maybe I should have made that clear.

As for everything else you stated I am with you on that, but even so it would take decades to accomplish something like what you are asking for. I wouldnt mind a simple remake with current or next gen visuals.

There are better reasons why Final Fantasy VII will never be remade that I have read about and chose not to mention in this article as to not stand on the shoulders of other writers. That's why I chose not to mention production cost and similar issues which I do agree, is a key issue.

I will also agree that FFVII is the largest final fantasy to date (in scope, though the XIII series may rival it in time) it's also worth noting the majority of the spin offs are considered sub-par, even detracting from the original experience as a whole (Dirge of Cerberus, really?).

Kids these days play COD or other shooting games, for their brain is too much to play good RPG or a game where the thinking is needed like puzzle or logical games :)... not just see-shoot-crawl-shoot :)

All Final Fantasy Villains Ranked From Worst to Best