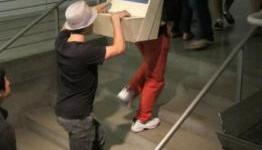 Games as art? These future developers really mean it

Alejandro Quan-Madrid writes: People who argue that video games are art should stop referencing Shadow of the Colossus and instead look at what the folks at the University of California Los Angeles Game Lab are doing. Tucked away in the north end of campus, the academic program recently hosted its second-annual Game Art Festival. I made it out to closing night of the two-day event and was quite amazed to see the many directions the participants are taking the medium.

The UCLA Broad Art Center was the venue for a fascinating intersection of an art gallery and video arcade. Inside, the bare, white walls were illuminated by projectors showing experimental games that played off of familiar genres. I saw a text-based adventure called Maybe Make Some Change that was a sort of essay critique on the horrors of the current wars. Nearby was Discrimination Pong where the rules constantly changed and disadvantaged the darker paddle (see pictures at the end of the article). Waist-high, unpainted, wooden cabinets housed the computer towers and served as holders for the necessary mice, keyboards, and controllers.

Some really cool ideas here. The future of the industry looks bright.