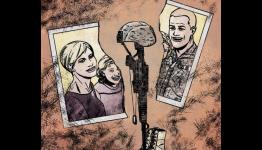 This Graphic Novel Shows The Horrific Costs of Modern Warfare

Kotaku: "Shooters protagonist Terry Glass isn't that different from the kind of character you'd play in a Medal of Honor, Battlefield or Call of Duty game. He's a fictional American soldier fighting in the geopolitical hotspots where America's armed forces face off against disparate, tough-to-pin-down threats."

kotaku.com
- Comments (0)+ Comments (0)
TopNewestOldest
The story is too old to be commented.
80°3