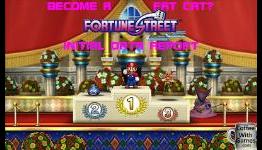 "Fortune Street was released in the U.S. on December 5, 2011 with a MSRP of $49.99. The game was developed by Square Enix, and published in the U.S. by Nintendo.
Fortune Street has a local multiplayer option for 1-4 players, as well as online multiplayer, and it is classified as a "Board Game" by Nintendo. The game received an ESRB rating of "Everyone" with "Comic Mischief" listed as the only content for parents and gamers to be aware of.
How many hours have Wii owners reported playing Fortune Street in the last several months, and does it appear to be fortunate for Nintendo? Let's take a look!", writes CoffeeWithGames.

coffeewithgames.com
- Comments (0)+ Comments (0)
TopNewestOldest
The story is too old to be commented.
90°7

Fortune Street, how much has it been played? Official U.S. Wii Nintendo Channel data report

Ten games that were meant to suck... but I ended up enjoying