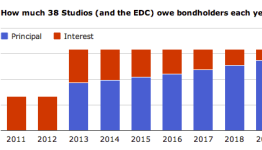 RI taxpayers actually on the hook for $112.6M with 38 Studios

Because the EDC technically sold “moral obligation bonds,” the governor is required to ask the General Assembly to appropriate money to repay the bondholders if 38 Studios can’t pay up – but the lawmakers are not required to pony up the money. It’s assumed they probably wouldn’t default, however.

Wow. I thought Reckoning sold pretty well. Two DLC packs that were both in XBL top downloads? Seems like someone is getting away with suitcases full of cash.

In the article, they have a link to another article that mentions what all the money is about (according to the article).

"38 Studios released its first game – “Kingdoms of Amalur: Reckoning” – in February to positive reviews and decent sales. But the taxpayer-backed loan is actually funding its other project – “Project Copernicus,” a massively multiplayer online game that was first targeted at a September release but has remained under wraps.

The questions about whether “Copernicus” remains on track – and whether Rhode Island’s investment is secure – grew in recent days after 38 Studios was removed from the list of companies scheduled to present at next month’s Electronic Entertainment Expo in Los Angeles, one of the gaming industry’s biggest events of the year. The EDC hired IBM in 2010 to provide ongoing third-party monitoring of 38 Studios’ progress."

Video Games Are a Labor Disaster

Looking Back at Kingdoms Of Amalur: Reckoning

No Charges in 38 Studios Criminal Investigation

No criminal charges to be filed in 38 Studios investigation

Phoenix Down 49.2 – Kingdoms of Amalur: Reckoning