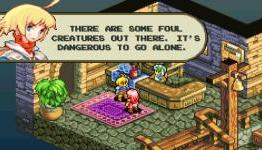 This week the crews take on the undead (as well as Telltale’s history) with an in-depth discussion of The Walking Dead: Episode 1: A New Day. Later, they discuss StarDrone Extreme’s voyage onto the Vita’s OLED screen as well as revisit the pixelated realms of the Xbox 360 version of Minecraft. Beyond a heaping dose of gaming trivia and a marriage proposal via a hacked The Legend of Zelda ROM, the crew answers responds to subjects ranging from the sluggish 360 dashboard to Polygon’s business model.

tech-gaming.com
- Comments (6)+ Comments (6)
TopNewestOldest
The story is too old to be commented.

My advice would be the same thing I say to my bowels: I wish these guys were more regular.

I'll be sure to grab Metamucil and real Florida prune juice as sponsors.

Good podcast, like the crew and they keep the show moving.

Pretty serious show this week from what I heard so far. No messing around, just games.