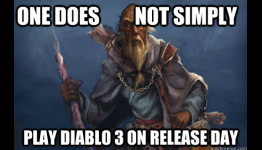 Adhttps://www.youtube.com/watch?v=EjfojxXOobE&t=463s
- Comments (12)+ Comments (12)
TopNewestOldest
Expand all
The story is too old to be commented.

Makes me feel better that I don't have this game yet.

This is an absolute joke. I feel bad for Diablo fans. I really do. I bought the game because I had $45 in gift cards at Target and have been playing Max Payne 3 instead, but I got home and tried to log on for the first time at 11AM EST and it is now 4:56 PM EST and I still have yet to be able to play my game.

There are no excuses for this. There is no reason I should need to give a crap about their servers to play a single player game. If the group play is down, fine, no big deal, I get it. But the single player?

All I can think of is the real fans (I've never played Diablo other than the beta so I am not claiming to be one) who probably took the day off from work to sit around and play it all day and have had most of their day ruined by what should never, ever, ever happen when you buy a product off a shelf on release day and try to play it.

I feel sorry for anyone who didnt anticipate something like this happening. pretty much any online game has issues at launch. but something like diablo III with its huge fanfare regardless of blizzards experience, was bound to have issues.

The main complaint here is the fact that Diablo 3 isn't just an online game.. while online is obviously a huge part of the game, there is a perfectly good offline single player game that people who paid money should still be able to access.

its been known for awhile now that you would need to be connected to blizzard to play even the single player. its not like single players are getting shafted more than online players. just spoiled gamers expecting everything under the sun to work how they want when they want. im not defending blizzard but facts are facts.

Agreed , even Starcraft 2 had the same problem which had an excellent single player.

When that was released i had just moved house and had no internet for 2 weeks and no way to activate in my current situation / location , it was a nightmare.

@Jukins I'm a spoiled gamer because I want to play the game I paid 60$ for? I don't understand. If this was LoL and I was whining sure. That is a free to play game but I paid for this and we aren't getting what we paid for.

Yeah, because they had NO IDEA a lot of people would try to play the game they just bought.