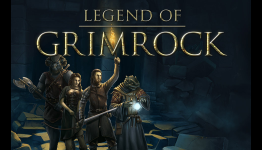 There’s something incredible about nostalgia. It’s powerful stuff. Even with today’s polygons and bloom lighting, nostalgia can make a game, that looks like it was built on a NES, into a top seller. Despite the move towards user friendly games, nostalgia can make a hardcore, unforgiving platformer a critically acclaimed gem. With Legend of Grimrock, Almost Human hopes to capture some of that force by reviving a long dormant genre from the early days of RPGs. And despite the sky-high bar set by the hype of rabid, old-school PC gamers and a well timed tweet from Notch, they succeed brilliantly in capturing the essence of Dungeon Master and its peers. But better yet, they do so in a way that makes the game accessible and modern without compromising its values.

newgamernation.com
- Comments (0)+ Comments (0)
TopNewestOldest
The story is too old to be commented.
90°

5 Enhanced Versions of Video Games We Played As Kids

The amazing Legend of Grimrock launches on iPhone

20 Useful Tips for Legend of Grimrock on iOS

Legend of Grimrock for iPhone is in the Works