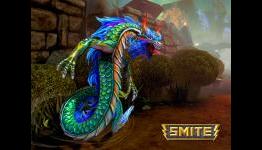 LoreHound.com writes: SMITE: Demigods, Deities and Gods Explained is a new column dedicated to introducing prospective players of SMITE to its massive back story of lore. From the Greek to Hindi, each week we’ll look at two characters from a major pantheon and provide a quick recap of their history and in what capacity their digital incarnation will represent on the field of Hi-Rez Studios upcoming MOBA.

Lore: Ao Kuang, usually spelled Ao Guang, is the destructive god known as the Dragon King of the East Sea. During his early years, Ao Guang reigned terror on man through the forces of nature. Droughts, storms and other natural disasters were his weapons of choice and his destruction continue unabated until Nezha, a protective deity, intervenes. After suffering a humiliating defeat at the hands of Nezha, Ao Guang seeks vengeance by kidnapping Nezha’s parents."

lorehound.com
- Comments (0)+ Comments (0)
TopNewestOldest
The story is too old to be commented.
60°3

Here’s how to unlock Rambo Ullr in Smite

Shiva the Destroyer is available now in Smite

Smite Season 9 arrives with a new map, event, and more

Atlas the Titan coming to Smite