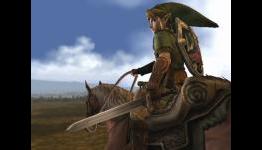 The Problem with Twilight Princess

ZD writes: When it was first released many people considered Twilight Princess to be a fresh, new Zelda game with a darker feel that introduced motion controls and other new gameplay elements. In many ways, this was true. Twilight Princess was a new Zelda game after all. But it also felt very unoriginal in many ways. I have heard many Zelda fans refer to it as a mere “Ocarina of Time upgrade.” And I must say, for the most part, I agree. Ocarina of Time was huge when it first came out. I felt like Twilight Princess was trying to do the same thing. Rather than just being its own game, it tried too hard to repeat the success of Ocarina of Time, and while it was a good game, it just didn’t have the same effect.

The thing when comparing Twilight Princess to OoT is
Oot made a big impact because it was 3d compared to A Link to the Past which was 2d. That's not saying that Oot wasn't an incredible game, it was, but the impact it made was even bigger at the time because of that fact.

It's much harder to make an impact when technology improves, but I think Twilight Princess did enough on its own to take the game to a new level. In the same way that Skyward Sword and The Wind Waker did. You will always have people with their favourites, but I love them all the same. (Pretty much anyway)

I'm lucky enough to have lived through all the times that each LOZ was released and can appreciate all of them for different reasons, but I think Twilight Princess did enough on its own merit to be considered a great addition to the LOZ franchise.

For the record A Link to the Past is my favourite, but I've loved them all.

Twilight Princess was phenomenal, loved every minute of it. My favourite Zelda remains Wind Waker.

I played nearly every Zelda to try to like the series. I don't like any of them and never finished any of them (including Ocarina of Time on 3DS). With the exception of Twilight. This one I liked and it's the only one that I finished.

Same here, tried hard to like the series because of all the good I've heard but never managed too. I think the wind waker was the worst for me. It had me baffled as to why people like LOZ so much.

Maybe have to give it another try ... again. But since I dont own any Nintendo systems it wont be anytime soon.

This is hands down my favorite Zelda game of all time and I'm a HUGE Zelda fan(my favorite series)I've played and defeated every single Zelda game multiple times..I love me some Ocarina but the story,pacing,graphics and fantastic music keep bringing me back to TP..come on Ninty please release a direct sequel to TP!!!

-One of the Best decisions I ever made was buying this on Gamecube as opposed to the Wii! :)

And the differences between them were...

-The world was mirrored and annoyed me, and I hate the Wii-Remote controls for Zelda games, I need a solid controller when playing those games.

The mirrored world was only a "problem" to those who played one version and then the other. One who played only the Wii version, as I did, would never notice it. It doesn't change anything at all.

As for the controls, it seems you didn't even try. Aiming with the Wii Remote is a thousand times better, and flicking to attack is so natural that it became automatic and when I played Ocarina on Virtual Console (tried to give it another chance after I finished Twilight), my wrist sometimes moved when I wanted to attack.

Have you played Resident Evil 4 on Wii? It's considered the best version because of the controls. What did you think of it?

-Well.. lol, I never played the Wii Version of RE:4 but I wanted too! I mulled over it several times even when it was down to 15 dollars, But I only played the Cube version when it originally came out. Don't get me wrong I love the Wii controls for most games, but then there are those that I absolutely need a classic controller Pro for, like Muramasa, goldeneye, Xeno, Smash bros. etc. Actually, the reason I was so disappointed with skyward sword was because the controls were annoying, the game was great, but I just longed to play it with the Classic instead.

Why The Legend of Zelda: Twilight Princess Makes More Sense for the Switch Than the Oracle Duology

10 GameCube Games We Need To See On Nintendo Switch

After 35 Years, Which Version of Link and Zelda Is The Best?

Ranking Every 3D Zelda From Worst To Best

The Legend of Zelda: Why Midna Is Link's BEST Companion