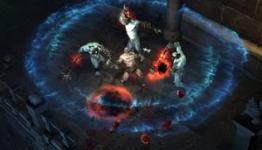 'Diablo' on consoles won't be a "simple port", says Blizzard

Diablo on consoles wouldn't be a "simple port", Blizzard has said.

Lead technical artist Julian Love and senior world designer Leonard Boyarsky told Digital Spy that the publisher is interested in bringing it to other platforms because they can make it "fit" for the platform more than any other of its games.

"The biggest interest for us for exploring consoles, and why we're exploring it, is we feel that it's something that we can do more than a job than just porting," said Love.

digitalspy.co.uk
- Comments (23)+ Comments (23)
TopNewestOldest
Expand all
The story is too old to be commented.

Is it going to be put on console or not?

Imagine this title in tandem with the DRC controller (Wii Upad).

Would be brilliant with the Wii-U pad! Really looking forward to seeing what cool things innovative devs do with that controller. The possibilities for good tactical/strategy games is pretty wild too, I think.

I think it will work on Wii U more than 360 or PS3. Not sure how hard it will be to port it but Wii U is more up to date than 360 and PS3 so it should be easier but we don't really know the specs of the Wii U.

Well said. Is it happening or not?

I can only keep my fingers crossed that somehow and some way Diablo 3 can find it's way to be ported to Xbox 360 or PS3.

Or next gen. I cant imagine it to be too hard to port to next gen console and have it ready for launch.

Yeah because even though Diablo 3 isn't exactly a demanding game for current hardware, it still requires at least a gig of RAM to run sufficiently, and I know it would be somewhat dumbed down for a port, but why make it then? It needs to be seen for what it is lol.

yes its not easy when you cant even get the pc version playing correctly at the moment. console would be nice tho.

They could easily port it.

Edit: had this before then removed it meant to be for Syko but ill put it back in for context my bad:)

Woah! are you still having issues logging in?

yes cant log in and it pisses me off i pay for a game i cant play. there not even a offline mode for single player.

Let's just pray the Servers are worked out by then...

I'd rather be looting, but here I am commenting on N4G. Thanks Blizzard.

Woah! are you still having issues logging in?

Blizzard says they will be up by 1:30...Hence the Fetal Position, lol

If The Witcher 2 can be put on the Xbox 360 and plays perfectly then I dont see how a game that needs only 1 button pressing most of the time would be difficult they could just do a port as the graphics arent that demanding at all either.

Will it have all the launch bugs of the PC version? Cause if it does, Blizzard dies.

People are really misreading this article... it sounds like the guy is saying that they have an interest in bringing Diablo to consoles but will do more than simply port over the PC version to make the console game unique to their respective systems.

I think it would do great on Wii-U with the touchscreen in the center of the controller...giving you many icons, and freeing up space on the TV, plus with the power of the system pushing 1080p it would really look good. The Wii-U could be the home of many computer games if developers play their cards right and take advantage of the controller. Good luck to them in bringing it to consoles.

still remember starcraft on the N64....

Would be good to see Diablo3 on the consoles...

Agree 1Disagree 0
▼✖-+
SPAMInappropriate
Show all comments (23)
The story is too old to be commented.
40°