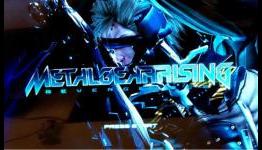 With the E3 less than a month away, Kojima Productions is hard at work to prepare for the show. One game that will be shown extensively is Metal Gear Rising Revengeance, which will also be playable.

Today Hideo Kojima posted a photo on his Twitter of the title screen for Rising's demo.

8 Underrated Original Game Soundtracks That Could Pass As Mainstream Music

You can now play as Raiden from Metal Gear Rising: Revengeance in Devil May Cry 5