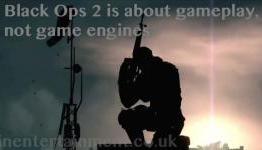 InEnt writes: Black Ops 2 zombies might only be a small part of the upcoming game but it shows how gameplay is really what true gaming is about – what we loved about zombies is how you have to work so closely together to survive, which brings some really intense gameplay and great memories with family, friends, and strangers. Treyarch has given their team plenty of room for creating the next zombie mode, which doesn’t need to follow the main theme of Black Ops 2 and we cannot wait to see where it takes us. Black Ops 2 will be more about gameplay than graphics for a number of reasons, so can you live with that?

Adhttps://n4g.com/General/Sponsored/arise
- Comments (15)+ Comments (15)
TopNewestOldest
Expand all
The story is too old to be commented.

I would have liked a better engine in Black Ops 2, but now is the time to forget about it and move on - lets enjoy the gameplay Black Ops 2 will offer, especially zombies.

I wish they made one for MW3 but being this late into the console cycle it would be pointless for them to make a new one. They will probably have to anyways when next gen hardware is announced. I think it should have went Black Ops, Black Ops 2, then a new engine MW3. That would last them about 4 years before having to update it.

you're kidding yourself if you think like that! CoD is 600p on console because they are pushing 60fps and with THAT, sacrifice has to be made in the form of resolution! that's pretty much known for so long now.

the thing is, even mid-end PCs are running hardware which can be considered as next gen compared to PS3 and 360 but do they use a next gen engine for CoD on PC? NO! so, why would you think that they will simply move on to a new engine comes the next gen? THEY WON'T! what they will do is bumping up the resolution to at least 720p HD (at last!) or maybe 1080p if next gen consoles are even half as powerful as today's high-end PCs!

k kid u got to understand something with the new consoles and stuff which are coming soon are going to be top notch. Ps3 is blueray!!!!! nothing compares to blueray none of "pc's high end" sh*t can compare to blueray. and ya of course they're going to use another game engine for the next installment of cod that will be released on the consoles. theyre not going to keep the sh*ty graphics for og consoles and bring it to the new platforms. Lastly, i'd like to say that they dont "step up" the engine for these so called high end pcs which are similar to ps3 ( which is not possibly, considering the fact that ps3 uses blueray) is because there is nothing to step up. one more thing, its not the pc's itself is a little thing called gameengine which actually makes or breaks the graphics but yet again im certain that none beat ps3 blueray and maybe similar but not the same. all in all, you are wrong good try though, just get your facts straight.

I love me some Treyarch zombies. I kind of wish it was its own game series a la Left 4 Dead. Imagine co-op survival missions like left 4 dead, regular horde zombie levels and a zombie campaign. You could take my money 3arc!!!!

$$ is the only thing on their mind!

Graphics are the only thing on YOUR mind.

People buy Call of Duty for the fun gameplay and addicting multiplayer.

No it's not time to simply move on.... it's time to let these bums at activision know.... its not okay to juice an engine for 4,5,6 years whatever its been. Especially not okay when your making billions of dollars a year and could easily finance the production of a new engine. Its a slap in the face to every cod fan and supporter out there whether you realize it or not.

I bought Cod 4 MW2 at launch and BO used for 10 bucks same with MW3. They are spitting these games out every year. As a fan I would like to see some improved graphics including a new engine! I like the gameplay but when is enough just enough! People like me who like COD deserve better from this $$ hungry giant. I understand its a business but even a business can give back and do a little more then expected. Which isnt much. Like Matthew says below me they can afford it and it wouldnt even dent their spendings.

The only thing that changes on all COD games are the title subtitle.

Well...there is that Day Z mod for Arma 2. On arrival betrayals, uneasy cooperation with 50 other players, hundreds of zombies in a huge single map.

i love these CoD fanboys ALREEADY trying SO hard to defend this garbage franchise using an engine from 2005.... ITS TIME for the fanchise to change, upgrade and and do something with itself... Fanboys already setting the bar WAYY low by settling for a 7yr engine... too funny...

Yep all cod fan boys are delluded this game was ok 3 to 4 years back now it's not they do so little work on these games and get billions of dollars for it look at infinity ward with mw3 copying and pasting buildings from mw1 now that's perthetic. A new engine would be to much trouble for them when they know people would still buy regardless.

You know something as soon as I hear some your the term fan boy to describe a fan of a game, I immediately note that the person making the comment is someone that isnt aware using the term fanboy is about the queerest most unoriginal adjective you could currently use in that instance. That's all I have to say about that.