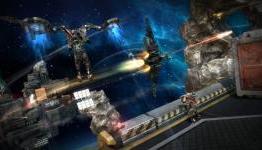 When Sony released the online-only battle game Warhawk a few years ago, it opened a whole new door for the franchise, which was just a six-level action game on the original PlayStation before that. With players jumping in to join the fight both on the ground and in the air, it introduced several battle tactics that most games just didn’t cover. Still, the fact you had to be online to get into it – without any sort of single player campaign – left us feeling that more could’ve been done with it. We did enjoy it, though. Now comes the sequel – well, not a direct one, but one in nature – with StarHawk, produced by the team at Lightbox Interactive, featuring a few dedicated team members from the Warhawk team at Incognito.

Loved Warhawk so this is a must buy for me...

You do know the game requires an Online Pass right?

Of course you didn't know.

love this game, online is so much fun (play with friends)