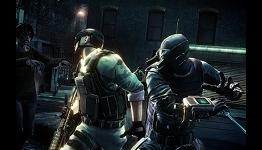 For a game that could have hit all the right notes, ORC is something of a disappointment in the opportunities missed. Randy Lamberson wades through zombies and AI and brings you our review.

press2reset.com
- Comments (3)+ Comments (3)
TopNewestOldest
The story is too old to be commented.

is this game just that bad?

From experience Yes. The A.I for both team and enemies are laughable to say the least. Then there is the high amount of humans (all operatives by the way) which makes you wonder how the hell Raccoon City was under siege.

Speaking of the Special Forces, you would swear they were the undead themselves judging by how many shots it takes to kill one.

The only somewhat saving grace is the online which you can easily play on a better game because Raccoon City doesn't bring anything new to the table for lasting appeal.

Unless you are a collector, I suggest you use the 60$ to buy some Scooby Snacks instead of picking this title up.

As a fan of RE I can safely say that the game is genuinely bad and not worth more than $10.

Hindsight 2020: The Most Disappointing Games Of The 2010s

The comeback of Capcom