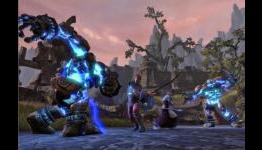 Excited for The Elder Scrolls Online? Here are three reasons you might want to be a bit cautious.

bitmob.com
- Comments (4)+ Comments (4)
TopNewestOldest
The story is too old to be commented.

The screenshots that have come out are not doing this game any favors. Very worried about it.

How's about the "completely suck your life away" part?

How the game looks is just fine, it's a generic MMO type of look. How it plays is what I'm interested in. It could turn out badly, but if they embrace what makes the Elder Scrolls what it is, while taking a new spin on it by putting it into the MMO Genre, then I'm game.

The bugs argument is stupid, an mmo would be completely different then a regular TES game, no one has ever release a game as open as TES with less bugs. There's way to many variations to account for, ten years of play testing wouldn't be enough for a game like Skyrim, Two Worlds or Gothic.

And nearly all mmos have bad launches, Rift is the only one I can think of that released in a very solid state.

As for a TES mmo, only time will tell. mmos are always hit or miss, it doesn't take much too fail.

The Elder Scrolls Online Expands Again and It's Impressive | COGconnected