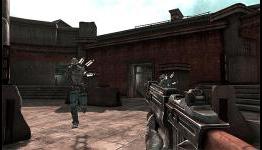 Gerard Campbell writes: Tom Riley isn't your typical first-person shooter hero. He's not a super soldier. He's a New York firefighter – more used to swinging an axe than wielding a gun but he's tasked with saving Earth in Resistance: Burning Skies, a shooter for Sony's new PS Vita. Set in the early days of a chimeran invasion of Earth in 1951, Burning Skies comes from Californian game developer Nihilistic Software (Vampire: Masquerade Redemption, Marvel Nemesis: Rise of the Imperfects) and is the fifth Resistance game (three appeared on the PlayStation 3 from Ratchet and Clank developers Insomniac).

Excited for this game! Only thing I'm not thrilled about, is when you kill a Chimera, he just explodes. Kinda odd. :\

Probably because the devs aren't used to the VITA yet so they don't want rag doll bodies eating up processing power.

Yeah how does one swing of an axe turn a body into all those pieces.

Man only 2 weeks! I hope this has a great campaign and isnt just run of the mill average with mp as the main dish. Give me a solid 8-10 hour sp minimum with some awesome levels like the prison or the train in r3 and il be happy.

A nice co-op mode wouldve been the icing on the cake as im getting burned out on revelations raid mode but whatever.