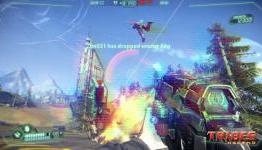 LoreHound.com writers: "On April 12, 2012, Hi-Rez Studios delivered on its promise to rejuvenate the Tribes franchise when it launched the fast-paced, skill-based Tribes: Ascend. Just shy of a month since release, we caught up with Todd Harris, COO of Hi-Rez Studios, to discuss the launch process, the future of the game and to facilitate a little industry jabbing.

LoreHound: First of all, congratulations on the launch of Tribes: Ascend. Did the team do anything special to celebrate the milestone? Besides praying to the server gods for a smooth launch, that is.

lorehound.com
- Comments (1)+ Comments (1)
TopNewestOldest
The story is too old to be commented.

I wonder what the female hit boxes will be like, when they're finally added, that is.

The Best Free Online Games For 2017

Hi-Rez gives Tribes: Ascend an "Out of the Blue" Update

All Starsiege and Tribes titles now free from Hi-Rez