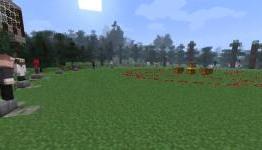 Minecraft Hunger Games exists, and it's just as amazing as you're imagining

What happens when you combine one of the hottest movies of the year with a giant virtual sandbox? You get perhaps the coolest custom Minecraft experience ever — not to mention plenty of chaos. Hunger Games-style Minecraft servers are popping up all over, and — short of an officially-licensed Hunger Games title — they are one of the best ways to live out your Mockingjay-fueled fantasies.

Adhttps://www.youtube.com/watch?v=EjfojxXOobE&t=463s
- Comments (7)+ Comments (7)
TopNewestOldest
The story is too old to be commented.

I saw this in Syndicate's video, looked really cool. Think I want to do it later this evening.

battle royal minecraft is what it should be. hunger games is shitty and the movie was terrible

Have you read the book?
Also they're the same plot but different enough to distinguish themselves.

no watched both movies. hunger games was a terrible mess. there were sooooooo many moments when i was like "really, thats what your gonna do????" and i dont need a gore fest but for a movie about pitting children against each other in a fight to the death it sure was pretty tame.

battle royal on the other hand nailed it, and unlike hunger games, despite having many more characters it even went as far as developing some of the other non main characters so when they died, you actually somewhat cared.

I was honestly just suggesting me and my friends try something like this earlier today and then I saw this article, crazy.