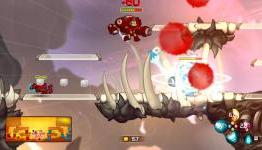 Ryan writes - "Well, we all expected it; Multiplayer Online Battle Arena (MOBA) games are on their way to the console. It’s been slowly happening in the darkness but it’s finally seeing the light at the end of the tunnel for this genre to blow up, yet again, to gamers everywhere. Because of their highly skilled-based PvP environments we’ve seen them kept almost exclusively on the PC platform… until now. Ronimo Games takes the first major stab at the market for consoles with their Xbox Live Arcade (XBLA) and Playstation Network title, “Awesomenauts“. In the year 3587 were they able to keep MOBAs the way we’ve grown to love?"

Awesomenauts is now available to everyone on Steam