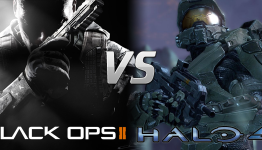 Halo 4 vs. Black Ops: Which will sell more?

Halo 4 and Black Ops 2 are being released within a week of each other, similar to MW3 and Halo Anniversary. Which one will sell more?

Don't know but November going to be a crazy month. I know both Microsoft and Activision going to be doing some serious marketing before and during November.

Have they stated that halo is november? I ask because the last few years it seems like the big microsoft shooter exclusives have been hitting in september.

Well duh, black ops 2 will sell more...it's a popular franchise that sells millions every release, and it's multi-platform...

I'm talking about just on Xbox ;)

But then that's a completely pointless question still. Halo is a 360 exclusive and a MS flagship series franchise. COD is COD...nuff said. But on Xbox, Halo is still probably going to outsell COD at least 2:1 alone.

Still Black Ops 2 without question. Each year Call of Duty sells on Xbox, more than any other title out there with a small exception of a few Nintendo titles. Then combine that with the rest of the platforms, and people who think CoD will stop soon are delusional. It's unfortunate in my opinion, but it's true.

If we are talking only on the 360, Halo 4 has a great chance of outselling BlOps 2.

Both games sold at nearly the same time in the same year.

The only COD game on the 360 it didn't outsell is MW3, but that is because no Halo game starring Master Chief was released at the same time as MW3.

I think it has a great chance of outselling it on the 360, as Chief has been gone for a while.

Halo fans are anxious to play as the Chief again.

There are a few different variables this time around though.

You have a new studio, a new direction, and it is against Treyarch which had 11 million in sales on the 360 with BlOps.

halo is a big title and it was the biggest fps before CoD came along, Im not saying it will beat CoD in sales but it is quite a well known title.

Call of Duty of course, only idiots are going to buy it and forget about the superior game which is Halo 4.

I'd still say cod, just because it's a title that hits a casual audience. Some players only own cod games. I can almost guarantee that halo owners are also fans of other games, but there are a lot of bros who just play cod.

The reason why it's looking at just Xbox is because xbox accounted for around 55% of COD sales.

Who approved this blog?

Anyway, Black Ops 2.
This is not a question of which will be the better game, this is about sales. Halo 4 has no chance to even outsell the 360 version.

It has in the past.

If Halo Reach had starred the Chief instead of noble 6 and the others, I bet Black Ops sales wouldn't have been as good.

We will see next year sometime.

Black Ops 2 will outsell Halo 4 on Xbox without a doubt.

But we all know that Halo 4 will be the better game.

I personally could care less: With the new DLC and battle-recorder coming for Battlefield 3, and it's already awesome gameplay and independent servers, I just don't see the appeal of buying yet another FPS.

This oversaturation of FPS games is making me get bored fast.

My money is better spent on Playstation All-stars, Jet Set Radio HD, God of War Ascension, LBP Karting, Assassin's Creed 3, The Last of us, The Walking Dead Tell-tail game series, Starhawk, Journey, Resident Evil 6, and many other NON-FPS games (how many does one need? I got Black Ops 1 and BF3--that's enough for me). You know how much all that costs? Who's got money to waste on another generic FPS, at the expense of enjoying all these other varieties of games?

Who needs another fps like Halo 4, Blops 2, or especially Medal of Honor: Warfighter (who NOBODY ever asked for a sequel to that particular game).

It not about what you want. The majority do want the game. Battlefield 3 is good but its no Halo..... and lol at your nobody asked for a sequel to MOH. FPS games are always gonna be popular. Always have been.

I'd guess Halo 4 to sell between 10-12 million copies, but I think Black Ops 2 will sell 13-15 like usual. Not really a fair comparison though. I will end up getting both because I enjoy both franchises, but I have no doubt Halo 4 will be the overall better experience.

Ummm, Black Ops 2 because its Multiplat?