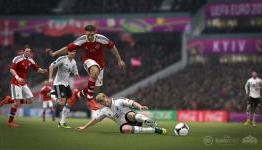 You’re damned if you do and damned if you don’t. That is probably what Electronic Arts think no matter how they handle their various sporting game franchises. Everyone loves Fifa 12, a game which is quite simply the finest football game currently available. Some may argue still available copies of Sensible Soccer or Striker beat it hands down, but in terms of providing real football in an interactive form there’s no question. Anyway, digression aside, everyone wants to be able to drive their chosen team to glory in this year’s most important international tournament, UEFA’s European Championship 2012 in Polkraine. Historically EA have released a separate standalone game to deliver against this expectation and demand. Forty pounds would get you a Fifa +; that year’s main release with some upgrades which will not otherwise be seen until the future iterations of the main event. Of course, in addition you got the razzmatazz of the tournament, some funky cutscenes and game modes. But really, was it worth forty pounds? EA have, for this reason at least in part, made a change. Now UEFA Euro 2012 is shared as downloadable content. It’s sixteen pounds.

Adhttps://www.youtube.com/watch?v=EjfojxXOobE&t=463s
- Comments (0)+ Comments (0)
TopNewestOldest
The story is too old to be commented.
850°Hot41

Will Multiplayer Get A Fix Next Gen?

Focus On FIFA – Part 2: Manager Mode and Coverage of Leagues I TheKoalition.com