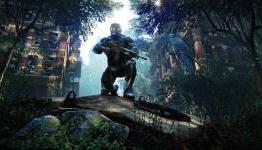 Preview: Crysis 3 (This Is My Joystick)

One of the video-game industry’s long running jokes involves the first Crysis. Many gamers found it difficult to run Crysis, back when it came out on the PC. A few years later and Crysis 3 has just been announced. It certainly would not run on PCs from that time, but are there any striking differences when comparing it to Crysis 2?

It’s vital to start by saying that Crysis 3 will use an enhanced version of the “CryENGINE 3” engine. The development team promises it will result in even better visuals. The main character is still Prophet and the story starts twenty years after Crysis 2, in 2047. There’s a world domination plot and it’s up to Prophet to save the day. It’s the typical action plot with some sci-fi references to make it less generic.

Adhttps://n4g.com/General/Sponsored/arise
- Comments (0)+ Comments (0)
TopNewestOldest
The story is too old to be commented.
80°1

Can It Run Crysis? The Only Steam Deck Question That Matters

Overhyped Games That Lived Up To Expectations

New version of Crysis Enhanced Edition is available for download