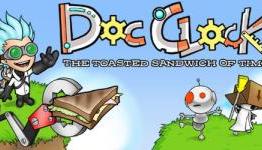 Original Gamer: "Stickmen Studios has quite the interesting history as developers are concerned. Not only did it receive money from the government to create games for autistic children, its office was destroyed in a 2011 earthquake. The developer, being relatively young, has a short list of games under its resume. Its past titles have been met with lukewarm reviews and its most recent project, Doc Clock on PSN, is no exception to this. Being a side-scroller, this puzzle based game relies too heavily on awkward controls and cheap puzzle mechanics concerning the combining of various objects. While it offers a bizarre story that has the potential to be a fun distraction, the negative aspects hinder the overall package."

original-gamer.com
- Comments (0)+ Comments (0)
TopNewestOldest
The story is too old to be commented.
30°

Name Your Own Price: The Race Against Time Bundle

PSNFancast Episode 2 - A Classic from the Land Down Under