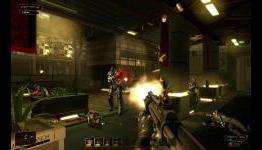 RPG’s: The Savior of the Shooter

Though Deus Ex introduced the idea over ten years ago, seeing an amalgamation of the shooter (third and first person) genre’s happening more often may help stem the tide of creative bankruptcy.

gamingenthusiast.net
- Comments (6)+ Comments (6)
TopNewestOldest
The story is too old to be commented.

Deus Ex HR i love that game, the best fps singleplayer ever imo:-)Peace:-)

indeed, its my favorite shooter by far, i didnt buy it until the price dropped because i wasnt sure of it, but ill definitely buy their next game right away. fantastic game

while we love to bash mass effect, it has added elements that have helped point out how the standard shooter could evolve. Now i am bias because i am an rpg fan and i like substance to my games. I get bored if i am not given alot of freedom and customization and carrots to yearn for. Now mass effect did begin as an rpg and i wish it had evolved in that direction but it fell into a time dominated by shooters and followed suitbecoming very successful in the process. Now, the silver lining may be that other shooters can do the same. I am not telling other rpgs to follow this path, just shooters. Games like ME and bioshock hav proven that they can hav great substanative fleshed out sps also. Deus exvis a phenomonal example. My second fav game last year, though i havnt finished batman. I cant wait for the next one. My worry is that it may go more streamline.

So, shooters can learn alot from rpgs. Rpgs can learn too, as i found me3 much better to control and i loved the multiplayer. And while shooters will never abandoned their core, rpgs must not either.

I play BF3 a lot, but I hope that the focus next gen will be on OTHER types of genre's too--Things the current gen didn't do well: Like MMO's (imagine every genre being seen in an mmo--FPS mmo, mmorpg's, etc).

now it's fun to go back to a game like that occasionaly like the excellent and AMAZING looking Hard Reset, but man, the proverbial carrot/mmo trick really gets me into a game

diablo 3 will be goty though, no first person game, or any other, matters this year, or will compare to the epicness that is Diablo 3! Only 22 hours to go!

Diving in to Saints Row - Be Your Own Boss | TheXboxHub