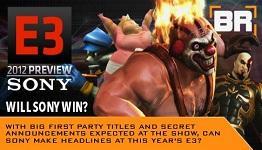 "What will Sony have in store for gamers at this year's E3? In this episode we discuss the biggest E3 predictions and beyond. Will Sony announce a new console? What about their first party line up - does it blow Microsoft and Nintendo out of the show? Can Sony win E3 2012? Find out."

gametrailers.com
- Comments (13)+ Comments (13)
TopNewestOldest
Expand all
The story is too old to be commented.

Still living in 2005 ? I'd take Getaway 3 and Eight Days but Eyedentify can stay dead.

In my opinion Sony always win since they're the ones I care about. But realistically speaking Nintendo might give them a challenge with the Wii-U reunvieling.

You need to wonder why bioshock is delayed and why gta v won't come out till 2013. R* has a game in plan for the holidays and it may very well be agent.

Throw out some Vita titles and you have my vote Sony

Shane is such an idiot

Sony has already won E3 2012. With the amazing amount of exclusives that are set to be announced, this doesn't even mention the surprises that Sony always brings the fans and Sony Snipers. Dark Sniper knows that E3 will bring him nothing but pure satisfaction, because he knows exactly what's on the horizon.

Jack Tretton and Kaz Hirai will once again take center stage and show you why Sony is at the forefront of primetime television. What we know is that Sony will be announcing over 20 brand new exclusives that is set to push the landscape of gaming once again with their greatness.

Dark Sniper feels sorry for those who are forced to watch the other press conferences that will show the same 5 exclusives like they always do with each system.

I learned something today, DarkSniper is black.
http://www.youtube.com/watc...

nice episode, this year E3 sure will be exiting or so I hope LOL , I want games and more games nothing more

Michael Pachter Predicts PlayStation Will Not Exist In 10 Years