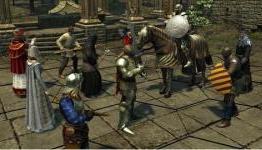 Legends of Eisenwald hit its Kickstarter goal and will be funded

DSOGaming writes: "Great news for indie and RPG fans as Legends of Eisenwald, an original mix of RPG and strategy, with tactical turn based battles and a simple economic model has hit its Kickstarter campaign and will be funded. Legends of Eisenwald promises to offer rich possibilities of gameplay mechanics, that will allow a player to feel being a hero of different stories ranging from treasure hunt to fighting for the throne."