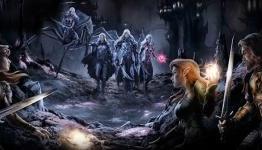 Long-time Dungeons & Dragons Online fans will remember that Turbine was preparing a paid expansion pack entitled Forsaken Lands back in 2006, but ended up cancelling those plans and instead released the Sands of Menechtarun-based content for free as the game's third content module. Fast forward six years and a hugely successful free-to-play business model switch later, and we're finally going to be getting a proper add-on for the game that's loaded with three adventure packs, a new raid, a new set of challenges, epic level advancement, and the long-awaited druid character class. And to sweeten the deal even further, Menace of the Underdark will be taking us out of Eberron and sending us into the Forgotten Realms and its drow-inhabited underworld.

Adhttps://n4g.com/General/Sponsored/arise
- Comments (0)+ Comments (0)
TopNewestOldest
The story is too old to be commented.
10°