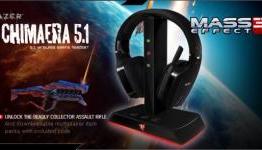 "As the Mass Effect 3 release date approached, Razer announced a literal heap of devices they would be releasing in partnership with BioWare. N7 branded mice, controllers, even bags, were all going to be shipped out to the world at large. The Razer Chimaera wireless headset was among this plethora of peripherals, and the device bears the high standardof quality set by Razer, now with a Mass Effect flourish.

The moment you receive the box for the headset, you’ll be floored. It is by no means small, and the package is designed to show off the Chimaera, while at the same time art from Mass Effect 3 surrounds it. Earth is burning, and the headphones within will help you put out the fires. As you eagerly unravel the packaging, you’ll be treated to the various staples of Razer customer service. Instruction manuals, Razer stickers, and a “Welcome to the Cult of Razer” message await you. Also inside is the all-in-one charger/wireless tower for the Chimaera."

Razer Reveals New Stormtrooper Controller And Charger For May The 4th