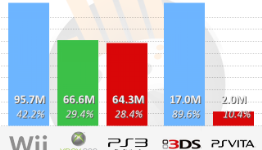 Not sure why more 3DS are being sold than ps3/360 but anyways good numbers for the ps3 and for all the sales goons NPD doesnt equal the world.

@gamingart We're talking about the 3ds not the vita silly.

Or do we wanna talk about modnation racers vita?

There sure is a huge amount of Nintendo haters on this website. It's really funny.

like snazzy talking about "crappy hardware and games" for [email protected] (opposite world much ?), and others on wiiu's articles, talking about wii 3 X more powerfull than gamecube, gamecube 3X more powerfull than ps2...forgetting than most of their "powerfull" consoles are coming 2/6 years after the competition, always talking about "current gen sucked" (just because they don't have the hardware to play the best games this gen=all on pCps3 combo), etc etc so don't complain, it's normal to be sad when crappiest hardware and library (just facts : check metascores) are selling more than best ones (like for movies, music : people are sheeps)

"Why is it the PS3 sells more than the 360 month on month and yet there is a continuous 2 million gap that never closes?"

because nobody knows the real gap today, it probably don't exist since months (if you add deads consoles, etc even more)..if ps3 sell better for npd, with european and asian domination since launch, ps3 is probably taking the place it deserve (don't even talk about other consoles, only 360 or wiiU can compete)

And so your idea of showing those blind Nintendo fanboys that they're ignorant and biased is to combat with even more fanboyism and bias.

Generally, the most effective way to combat fanboiysm(no way is ACTUALLY effective) is to use fanboyism.

Shnazzyone's comment isn't borderline trolling, it's definitive trolling, and fanboy trolling at that. Bringing up the Vita in response to negative comments about the 3DS when the Vita wasn't even part of the conversation? No, that's not ignorant or biased. Mentioning the 3DS's best games and comparing them to one mediocre Vita game(he could have brought up The Show, Uncharted, Unit 13, Mortal Kombat, Escape Plan, and others, but that would be logical)? Not biased or ignorant at all.

At least kikizoo's "fanboyism" isn't directly attacking or putting down anyone else's preferred systems or games; he's simply defending his own preference. It's somewhat off-topic, as it's got nothing to do with handhelds, but it's still not as bad as Shnazzy's silliness.

@thegamingart
It has several great games, and even more so in Japan.
Its most serious competitors are an old Sony handheld with a good deal of market penetration already and a new Sony handheld with far fewer games while being more expensive.

And I would hardly call the hardware crap, as it does what it is supposed to do: play fun games.

It is the cheapest (in price) next gen console or current depends on how you look and categorize it.

Also it comes in more than one color.

NPD does not equal the world, nor does VGChartz. NPD numbers are REAL, VGChartz numbers are FAKE.

Plus those games are SUUUUUPER!

3DS is 150 to 170, cheapest thus sold. Plus Nintendogs, Pokemon, Monster Hunter, Mario. Kids want it. Simple as that.

EVERYONE wants it... I hate the whoels ells to kids only mindset... 3DS is selling to kids and adults alike because right now it has better games and a better price

If its only kids buying 3DS, can we explain the sells of RE: Revelations, MGS Snake eater 3D, and other M rated games already selling better than they did on the Wii?

Don't worry yabhero. People like Nutsack said the same thing about the DS too, so its best not to pay them any mind.

This proves we need new hardware across the board. But shit, there's so many games for 3ds right now. Best portable system since the GBAsp if you ask me.

I loving Kid icarus right now, fuck the haters. That gave me a joy in gaming I haven't experienced in a long long time.

Wow you clearly are sensitive. I don't know why the thought of another portable bothers you so much because there's clearly plenty of space for two on the market. Both are great handhelds to own and each offers a unique experience to gaming. Neither the Vita nor the 3DS have bad library but I will admit that the 3DSs is more robust due to it being out longer on the market.

You know what portable you should really hate? The cheap Chinese knockoffs of the 3DS and the VITA they are absolutely horrible. Whoever invented the Yinlips should be shot.

where in his comment that implies that he hate the vita or are everyone looking for excuses to hate every fan of any non-sony product?

The 3DS is clearly at the top of the list, and you didn't even say anything negative about any other consoles.

You are a Nintendo fan with the numbers to back it up, a crime that they will never forgive you for.

Bubble Up vote for being the voice of reason amongst utter stupidity.

I don't get why people still keep buying the Wii. it is basically dead, what are you people doing?

Maybe people who know the Wii is kid friendly, and their kid is just now old enough to play games... *shrug*

because it has great games.. and it means they haven't experienced it yet

Well, I know some people who've had a rough life ove the last 6 years and are just now able to get a Wii at the end of the cycle. maybe thats why.

From their perspective its cheap now with cheap games that they want.

Why is it the PS3 sells more than the 360 month on month and yet there is a continuous 2 million gap that never closes?

Its only outselling by around 20,000 to 30,000 units each time. Holiday season comes out and that usually gives the xbox a boost and allows it to catch up

PS3 smashed the competition (home consoles). PSV is also building a great foundation for a premium priced piece of hardware, bring on the games.

Poor numbers all round, but to be expected near the end of a generation.

Doesnt feel that long ago I was playing motorstorm on the ps3 or crackdown on the 360!

Heres hoping E3 has many surprises as I still think a lot of people are waiting for certain killer exclusives on their console before purchasing - I am looking at ps3 and vita here mainly. Though I am very happy with what both have and will continue to provide, all I am saying is I would like my versus and last guardian very soon please :)