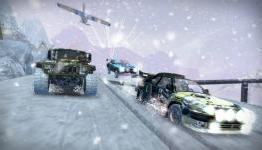 Sony has pulled two PSP titles from the PlayStation Network, reportedly over concerns that they can be used in Vita exploits. Hot Shots Tennis (called Everybody's Tennis in Europe) and MotorStorm Arctic Rift are no longer available for download from any device that connects to the PlayStation Store.

Ok Sony is just protecting their product. This exploit can lead to the death of the vita.

... and who is protecting the consumer?

From what I understand (as the Motorstorm game has been off the market for some time now), games you already purchased isn't available for download either i.e. the completely cut it off to all users, not just to new potential customers.

Hopefully it will get put back up soon for those who purchased the game.

If you look at the alt sources for this, Eurogamer got a comment from Sony stating: "We've suspended sales of Everybody's Tennis and MotorStorm Arctic Edge for software stability improvement." - Implying they will be back, I think.

Yeah, a small security hole is like a loose thread on a shirt. It starts off minor, but if you keep pulling and pulling you’ll have no shirt, and no security. Even though this is just another PSP emulator exploit (It's just PSP homebrew Sony), I can wait until Sony puts it back up again patched .

Otherwise, the protecting the consumer notion carries no weight.

Sony is protecting the consumers. If the Vita ends up like the PSP(hacked to death) then no one wins except the hackers.

Blame the hackers. If they weren't ******* around trying to hack everything none of this **** would be necessary.

I based it on another story posted a few days ago, found here:

"Even if they had the game downloaded prior to their PS3 there was no way to transfer it to the Vita. This is because in order to transfer games between the systems the files must be activated. When the game was taken down from the Store there was now no way to grab activation files from the network."

I don't own a PS Vita, although my brother does. That's why I say from what I understand....

Because when games have been taken OFF the network, as long as you downloaded them already or bought them, they are still in your download list

Storm and Gran Turismo HD concept are prime examples of that. And I know THAT for a fact because Gran Turimso Concept was taken off the store almost 2 1/2 years ago yet it's still in my download list and I can download it right now if I wanted.

So basically, this is false info/ FUD being spread

Edit- And that article isn't a factual source. That's just someone that bought forum software (which I also know because my forum uses the SAME IPB )spreading nonsense. I know that too because I own a forum and can easily do that same thing. Except I don't use my forum to spread misinformation like this one obviously does

I guess people...AKA joystick forgot there are still places you can buy games in a box. Now if these titles are only on PSN then yes this is a problem but if not...well a lot of people still go to stores to pick up their games.

I agree with you on this one. But its not just hackers its part of life in general. Everything in life costs alot because of people who try and get it for nothing or bend the rules.

I hope ms is put back on soon as i loved this game and when i got my psv i thought i want to put lbp ms and gtpsp on my psv as i had them on my go but i noticed ms had gone and for some reason my ps3 is saying i have to buy gtpsp again even though it shows up as i own it but sony are looking into this for me but i managed to put lbp on my psv so im happy for now with this but hope to get the other two soon.

Man,
Someone bubbled you down, for trolling.

It's just amazing how people can be soooo stupid.

For those who have a vita, and want it to be hacked, would you be happy if tomorrow, studios stopped making new games, and you will be forced to play the line up games, until vita2 comes out?

For those Sony haters, who love to see his Xbox do a rrod every 4 months, and hate Sony and are happy if anything Sony does just fail, why don't you
Stfu?

Don't be jealous if you can't buy a Sony console, like ps3 or vita, because you rely on your daddy, to buy you a new game every 6 months, and daddy just lost his job, and now you will have to play halo cod halo cod halo cod 24/7

Are people just took stupid to realize that once a console is hacked, no more AAA games are released? Do you think if the ps3 was hacked (I mean a massive hack, with 20 million people, not the current , maybe 50-100'000), do you think we could have played uncharted 2, god of war 3, infamous 2, and the next the last of us?

We would be playing a few crappy games, no more me3, no more nothing.
How can people be solo stupid like this, its incredible.

@LordMe 100% agree with you man.. I hate hackers the ruin everything for us "real" gamers

Fixing a known exploit that leads to homebrew use on the Vita isn't unreasonable. So people can't download TWO psp games until they're patched up....so what? You make it sound like a Japanese internment camp.

edit: LOL, alright, I admit that was an extreme example, but my point is that you're making it sound as if people are being seriously wronged or even just feel that way, and I simply don't believe that hackers are going to double their efforts over 2 oldish games being temporarily removed from PSN. Even the slight chance of that is probably worth preventing Vita from being cracked wide open for a while longer.

How am I meaking it sound like people are being seriously wronged? It's annoying for people who has purchased the game, and it might lead to hackers claiming that this is unacceptable and retaliate. All I'm saying is that manufacturers in general, like Google and Valve, should not care a bit about hackers and try to satisfy their customers demands instead. These seems to be the tactics that have worked best against hacking so far after all. Same concept with DRMs, which infuriated hackers and made DRM games amongst the most hacked games.

But I'm sure Sony will figure things out, and unlike what you somehow managed to read I don't think people are being seriously wronged. In this instance. Yet.

damn you hackers. if you did not do this, then sony would not remove my games! i blame the hackers!!

I hope the Vita does get hacked. Maybe then it will be worth buying. All Sony is doing is taking content from console titles & putting them on that lame handheld (like SFxTK DLC characters as they won't be available until after the Vita version is out). PSP was good but the Vita sucks. I'd buy a 3DS over that mediocre Vita handheld any day.

I hope you'll get hacked too by aids.

That made me laugh.

You have never even played a Vita so how do you know if it's lame or not??

There's also a step closer with someone gaining psp kernel mode not just user space like up until now.
And yes there will be more psp titles that work ...

The ultimate result of these things is that Sony will wind up disabling support of PSP games for the Vita. And you know, that will really, REALLY suck.

But I wouldn't blame them for doing so. There are a lot of idiots and trolls in this thread(I'm looking at YOU, gamingdroid), and I'm certain more will appear. It seems that these individuals don't understand the negative ramifications of allowing such an exploit to run unchecked; if they DO understand the dangers, then for some unfathomable reason, they will ill upon the Vita, Sony, and everyone who will be negatively affected.

Five Underrated Games That Should Have Gotten More Love