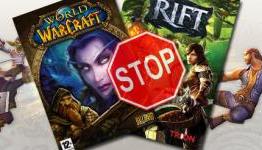 Pay-to-play subscription-based MMOs have been around for a very long time now. A fact illustrated by World of Warcraft celebrating its seventh anniversary November of last year. EverQuest turned twelve and Ultima Online is now fourteen.

"In this fashion, Blizzard set the bar for subscription-based MMOs to introduce themselves to new players by giving them the opportunity to have free rein without being tethered to a subscription."

I'm sure Warhammer online done this long before Blizzard did!!?

I completely agree with this. It's just misleading, and actually false-advertising, to label an MMO as free-to-play, when in fact it is nothing but a limited trial of the game.

They do it to try and get people to flock to it, and to try and get them hooked on the game. Most people don't read a thing, so they just see the words "Free to Play!" and create an account and start playing, only to find out that after so much time, or when they reach a certain level, that they are locked out and prompted to purchase. So, since they already invested some time into the game, and they want to keep playing, they feel like they are almost obligated to continue on with a subscription. They then proceed to whine to their moms and dads for their credit card. Oh, and don't forget that plenty of those people will also forget to cancel their subscription at some point, usually from the kids that use their parents credit cards, so that's even more money rolling in.

It's really just a cheap and wrong tactic for the companies to use try to rake in even more money.