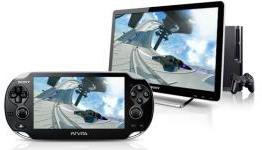 PS Vita: Your PS3 On The Go…..Literally

“You dump 20, 30, 40 hours into a mode, and it’s time to go on a business trip,” Russell said. “You save that file up into a Cloud. Pick up your PlayStation Vita. Take it on the road. Download it from the Cloud and you keep going. And it works vice versa.”

WIN! only if you have 3G though. Can be pricey.

Or a phone that does wireless hotspot. Use your phones data plan at no extra cost.

Most smartphones now can be used as a wifi hotspot just like my phone so I really see no need to buy a 3G PS Vita and I got a 5gb data plan so when I use my Vita i'll always be online when i'm on the road :)

You can always cloud it BEFORE leaving, too.

Ok. No PMS. Is this better?

Good job blocking me. Why did you do that? Afraid to lose an argument?

Ooops., didn't realise you could do that. Thanks for the info.

Might just do that then and get a Wi-fi Vita. Sweet!

And I'm assuming every PlayStation fan on this site has a Vita?

........why? Vita hasn't even really launched outside Japan yet, other than some pre-order stuff.

I thought it came out the 15th?

It did come out on the 15th, it's that one week earlier bundle with a bunch of good stuff.

Those who pre-ordered got in on the 15th. It releases on the 22nd I believe. I don't plan on getting a Vita until the price drops which I plan to wait a year or two for.

i tested a vita console in a store with uncharted game & tbh i wasn't impressed because i felt the game deserved a bigger screen to be truly appreciated otherwise it's true the vita is just like having a 5 inch Ps3 in your pocket.

Wait, so you weren't impressed because the game felt too big for a handheld?

Shouldn't you be impressed that a console-sized game was on a handheld in the first place?

And I don't understand how the screen is too small because the game is like something you'd play on a home console. Are there stipulations on screen size for certain games, now? This is news to me.

I thought the point of ANY handheld was to provide a great gaming experience on the go. Since the Vita is currently aimed primarily at people who own a PS3, it only makes sense to me that it be like a home console you can take anywhere.

Honestly, I REALLY don't get your issue with the screen not being big enough.

no the screen is simply too small for some of the home console like games.

one of the main reason's why nintendo handhelds are more successful is because they don't try to be home consoles. (i hope you now know what i mean).

Well after watching the killzone 3 being played through remote play all I have to say is the screen size is very good and uncharted and UMvC3 play great too. Its better then the 3ds' screen which is very bad for games like Super Street fighter, DOA, and Resident evi.

Hopefully Sony and other companies bundle PS3/Vita versions together in order to make it more worthwhile. As much as I want to be able to play my Show or Madden franchise on the go, I'm not sure if I want to do it paying $59.99 plus another 39.99 or 49.99. A nice bundle at $79.99 would be nice.

That's cute that the author thinks he knows what "literally" means.