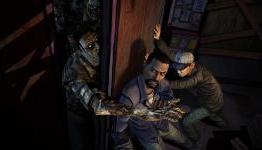 The Walking Dead Game has got 3 new screenshots for you all to enjoy.

Not realy liking the whole cartoon looking approach to this game. It would of been better as a full adapted game for retail with more of a realistic look.

Oh and wheres Rick and the gang....this is walking dead after all, can't have that without Rick.

The game direction is unfortunate. If they could have gotten a dev like Bethesda on board and go full open world with co-op it would have been 100% win.

Don't know about co-op since in my opinion open world games and co-op don't mix well (Borderlands was alright although the map was spilt into sections with loading screens).....but an open world game would be fun.

It look so cartoony :/

It LOOKS "cartooney" because the show is actually BASED on a graphic novel - a *comic* book.

game was gonna suck regardless.

probably as bad or worse than the prison break game

how do you know its gona suck? you a tester or have the game in your hands?

There goes hope for that game....

Why so pre-judgemental? Because the game Cell-Shaded? Are people really THAT unaware that "The Walking Dead" television show AND this game are based off of a fantastic ongoing comic series? The art direction of the game should come as no shock (if anything the shock should come from the inclusion of colour). Being a fan of both the comic series and the television show, I for one am fine with the artwork, and, I'm glad that the game doesn't follow Rick and the gang, because if it did, it would either be retelling the story, or following on in it's own direction, and that would make for complicated reading/viewing and playing to keep up with 3 different story paths...

Do people expect Last of Us level graphics? It's a Live Arcade title (let me guess people hate that to), it's going to have a degree of limitations. I for one think it looks great.

Er actually I read the comics and have watched the show since it aired.

I didn't state anything regarding the graphics, and if my complaint was about the graphics I would have simply replied to someone above to agree. I don't like that they took what is easily one of the best stories out there and are making a half arsed download title with it. This title of this game could EASILY mean it is the number one game to compete with The Last of Us, not visually, but gameplay wise. The Walking Dead is about survival, and after watching a dev diary that doesn't seem to be their priority.

Why did I say my comment? Look at the screens, huge emphasis on Walkers....so we are probably going to be running around shooting zombies, which we shouldn't be doing in this Walking Dead world since they don't have ammo, and it attracts the Walkers.

I'll still give the game a chance, but like I said there goes my hope for that game.

The cartoon graphics is why im not going to buy this game, they should've chose a better developer than the one who made jurrasic park, the game that totally failed. The cartoony look just takes the horror and realism away from it. I think i'll just go with Naughty dog's The last of us instead of this game.

Ranking the Best Killers in ‘Dead by Daylight’