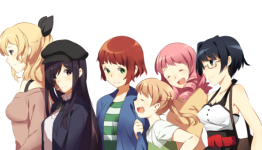 Trevor of GAMElitist.com - "I can’t escape this damn game, whether it’s IM conversations, a podcast rant, or even arguing on comment boards. So let me be very clear on this point, with no offense to Laura, Asher, or any of the other writers who praised this game on this very site: I loathe Katawa Shoujo."

I like this. Specially after reading the comment section because I see some people got exposed. I feel this is something that happens way too often in the gaming world and that's not a good thing. People come and rate games with 10/10's because of the hype and excitement and then a few days later they are like: I think I rated that game too high (or maybe too low) but now it's too late.

Sites like IGN and Gamespot are examples of this. That guy that rated R&C too low because of too much variety seemed insecure when he was defending his score and then we have IGN with FFXIII where they rated it too high and even gave it an Editor's Choice award and now they are talking about how crap it was and the many things that XIII-2 has "fixed".