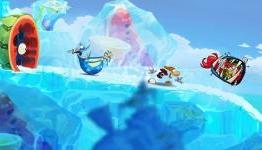 MP1st - "2011 has come and gone, and the last of the ubiquitous Game of the Year awards have trickled through the blogosphere. MP1st has already declared its greatest multiplayer experience of 2011, but there is more to multiplayer then competitive gaming. Sometimes the heat of the battlefield induces rage-quitting, creative profanity-spewing, and the KDR sweats (My Modern Warfare 3 KDR is below 1.0; I can’t even log into the game without my kneepits dripping)."

Adhttps://store.steampowered.com/app/1488200/Symphony_of_War_The_Nephilim_Saga/?utm_source=n4g&utm_medium=native&utm_campaign=sow_n4g_native&utm_content=png
- Comments (1)+ Comments (1)
TopNewestOldest
The story is too old to be commented.
3969d ago

Why Rayman Origins Is Still Worth Picking Up After 10 Years

Great Moments in Gaming: Land of the Livid Dead in ‘Rayman Origins’

Ubisoft Giving Away Free Game During E3 In An Unusual Way