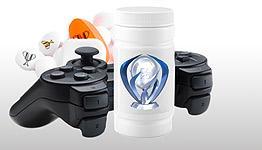 What Turns A Gamer Into a Trophy/Achievement Junkie?

With such a large amount of “easy platinum trophies” search queries in Google each month, there has to be reasons why trophy hunting is so popular. Is trophy hunting only a waste of time? Are trophies or achievements a useless feature that shouldn’t exist? And most importantly: What turns a gamer into a trophy junkie?

If my friends get a 1-up on me, I'll hunt them down like a rabid dog!

That's what makes me hunt trophies.

I usually "hunt trophies" from the games that I REALLY like. It is only a good thing to get the most out of those games :)

NOW! It would be interesting to hear why do You enjoy or hate trophies/achievements?

I think trophys/achievements are totally bogus, never gotten all the trophies in a game ever, never even tried collecting all the trophies in a game...its a reward system "outside" the game itself to me, an "achievement" is something that leads to better things, like a Skill Point or Special Item not something to supplement a gamer-score or other totally arbitrary system of rating you as a gamer

gaming because they have OCD that every human has at least a little bit.

but they will come round soon enough, I was a whore once and it sucked the fun out of gaming. But when I actually sat down and realised what I was doing. It was clear it needed to be stopped

now I havent looked at my achievement list in 2 years, and never looked at my trophy list not once since I have had a PS3

waste of your gaming time, and it took me about 3 years to realise it

So you would be more interested in getting the trophies if they had some in-game reward attached to them?
For example: "Liberty City Minute," finish GTAIV in less than 40 hours, would be worth getting if you got a bulletproof Infernus out of it.

"I think trophys/achievements are totally bogus"

I completely agree. To me, they are a cheap way for devs to fool people into thinking they're getting more content when we're actually getting less this gen. Games are shorter in general and content that should be (and sometimes is) included on the disc at purchase is sold as DLC,

For me it is time killing. I play the game normally then I try to get the trophies until I can afford a new game or a new game is released.

well trophies gives a challenge for me even after i beat a game ill go back and try go gain all those hard one i missed out. it also nice competition between friends, one of my friends has like two levels of trophies over me but i trump him by the fact that i hav a level 8 trophies on psn and 3500 gamer score on xbl soo best of both world :D

They are a nice bonus for me....but there are ones that are out of my reach, i accept that and move on to the next game

Trophy hunting is a nice way to explore my favorite games to the fullest. Im not a trophy addict but im trophy consious. Lol

I'm still working on the dark souls plat, which I'd sword I would get since I got the game. I have been playing other stuff, but I'll get it eventually.

i think its boredom and then the fact that they are there. my trophy level is a few 10s of percents off from 18 and i stopped trophy hunting at the beginning of 2k11 so i ddint trophy hunt all last year or this year. you can get burned out if your not praised much about it or if your level doesn't get much recognition.

The experience the game provides always comes first, but I don't mind taking a look at the trophy list when I'm going through the game again. Especially when the game is good.

It is a way to make sure I get the most out of the title. That is the most important reason IF the game is worth it.

This is how I deal with trophies. First off I play a game for as long as I feel like. Some games I complete once and other games I complete several times just because of the fun I'm having with it. During this time I don't give a single thought to trophies.

If I enjoyed the game enough I start going for trophies, sometimes just for some that seem fun or challenging and sometimes for all of them, none of them or just the ones required for the platinum trophy.

This way I get the full enjoyment of all games I play because I start off playing how I want to play, for as long I want to, and then get some extended playtime with the game when going for trophies.

Also I've always been more or less a completionist when it comes to games. Ever since the first game I owned, I've always wanted to feel I truly completed a game if I liked it enough. And getting a nice platinum trophy from doing just what I've always liked to do is just a bonus for me, because in most cases I would do it anyway regardless of trophies.

Also on a personal level I see acquiring the platinum trophy for a game as a way to show some respect for the game. Having a platinum trophy from a game is a passive way of telling everyone who ever comes across my trophy list "Hey, I like this game!"

It is something the xbox community make a big deal about.. Do trophies or achievements really improve the gaming experience imo no