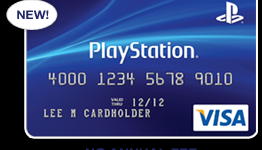 Get a $50 PlayStation Network Code

Find out how you can get $50 PSN code once you sign up for the new Playstation Card.

and done got approved and will transfer another account to this one close that one , they charge for a annual fee, so good bye to that and hello 50$ psn card .

He is going to transfer his other balance (from another credit card) to this one as the credit card he currently uses charges an annual fee :)

Can anyone confirm if this is US only?

I'm very protective of my credit rating, so I wouldn't open this just for a $50 card. Furthermore, it's a Capital One card, which, IMHO, is one of the worst credit card companies out there. What may start off as reasonable APRs and deals get quickly changed 3 to 12 months afterwards.

Idk man. Capital one is better than bank of america, chase, citi card, and american express.

At least they dont skyrocket the apr just cuz u paid a payment late only once. And they are willing to work with u on most cases.

Those other companies especially american express are pure capitalistic evilness right there.

I can assure you, as an Amex member that Amex is probably the BEST credit card company out there.

Sure, it can be expensive, but they aren't for everyone. And the perks / rewards system are legit.

as a previous Amex holder, i would like to ask how Amex is good other than giving u a high credit limit up front than as u get into debt they start limiting ur credit and raises ur apr to 29.99%

they also penalize u for paying late only once. as far as payment disputes goes, they had the same level of service as any other company.

but u are right in that, they do reward u with airline miles or credit depending on which kind of account u opened.

also its good to note that they have made changes throughout the history of the company so it also depends on which time frame u were with the company.

just my thoughts and opinions. it can vary from other Amex members.

do not close your other card, hurts credit, just don't use it

This is a capital one card and I already have a capital one card. So I asked them if I could just transfer my account to a Playstation card and they said I had to go through the whole application process despite being an established customer.. I know I'll get turned down if they pull my credit record due to old debts still haunting me, sad face:(

I'd get it just because it looks cool.

i know what you mean, but i got it anyway, my credit is super good, just gotta know how to control yourself.

i got this card exclusively for DLC. will only use it when i buy PSN games or DLC :P, which is rare, so its managable :D

Does your credit score take a hit for this?

every time you apply or anything takes like a point hit
they only do that so you dont go applying to 20 cards in one day and get approved. It's not bad to apply from time to time.

I wish this was in canada too

someone care to answer? thanks :D

I haven't applied but once you start it it will show you before you submit with % and everything.

@spektical and no theres no annual fee

No annual fee, 0% interest for a probationary period and then you get like 15-24% apr.. Good deal for all of the psn points you get...

I could really use this.

Stay away from Capital One!!!

They were hounding me like 2 years ago to sign up for a card.. They would call and mail me stuff all the time.. Anyways, I finally agreed to just TALK to them... I have good credit.. Have never missed 1 payment since I was 18 and since 21 have always paid off the balance in full every month.. My current Visa with my bank offers me prime + .5% and Capital One was offering me 18.4% with a $195 annual fee.... Please, stay away.. This will not make you a more dedicated gamer, just a bad consumer..

do they not know when to accept defeat?

I've got a capital one card and it's been a pleasure.. Don't know why you've had a bad experience but mine's been all good..

Is this available in Asia?

I've never had a credit card, so I doubt I would get accepted. I would hate to forget a payment and get charged extra. I may apply later cause I use PSN a lot. Not too disappointed if I get declined.

Sony could make PlayStation VR2 compatible with gaming PCs, and it should