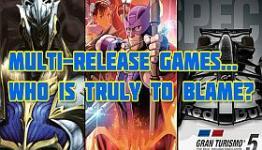 Multi release games… who is truly to blame?

Lens of Truth writes - "Many things, both good and bad, have been set into motion this generation of consoles. One thing that we seem to be seeing more and more of is the re-release of games that should not need to be put out more than once. Now I’m not talking about HD remakes of classic PS2 games nor the digital sale of some of the older generation’s gems, as this is actually a good thing. No I’m talking about games that seem to get rushed out and sold for full price, just to have another more complete version released later down the road."

Who is to blame? Capcom and the idiots that buy the same fighting game over and over.

they claim gt5 is milked try call of duty street fighter mario halos wwe games madden need for speed asc series they are the ones that are milked released every year i would say ratchet and clank but there isnt a new ratchet and clank coming this year?

You don't like them? Too bad for you. But guess what, they're completely optional. Some people are actually looking forward to GT5 Spec II even though they purchased GT5 at release,

I'd be more worried about CoD or Forza, those franchises are really being milked at the cost of quality.

GT5 doesn't belong on such a list, and they sort of say as much towards the end of the article, but I'll reiterate why.

Only one true GT game this gen. Was already in production and delayed forever, needed to be released already as PD was losing face.

No DLC on disc, no DLC for a full year for that matter.

Re-release is a technical improvement and not just coupons for more content. Patches all included, and they're hefty and necessary as 2.0 made the game much better. The save on HD space is a plus as it's a 10GB install already.

Cheaper price point. Game's already sold 7 million so nothing to prove in that dept. Other games like LBP2 still charge full price for their "complete" editions.

Every Marvel vs. Capcom Character, Together At Last

Every Capcom Vs. Game Ranked

Why Capcom should make a new Versus fighting game

Deadpool Was Almost Excluded From Marvel vs. Capcom 3 Due to a Translation Error

Marvel Vs. Capcom’s 20th Anniversary: Looking Back On A Legacy