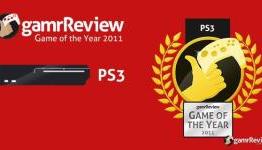 Gordon Bryant says: "There's no denying that the PlayStation 3 has enjoyed its share of ups and downs since its release in 2006, but the tides are changing and with each passing year the console gets stronger and stronger. 2011 is arguably its best year yet, in spite of an unpleasant slump in the middle when PSN got hacked. While many of the best games to come out were multiplatform, the PS3 also had its best line-up of exclusive content to date. The following is the best the console has to offer in 2011."

Skyrim was my personal favourite game of this year, but I hear it wasn't great on PS3 (I played it on PC). Portal 2 is brilliant too, and fully deserves this victory.

Skyrim > Portal 2 > Uncharted 3 were my top three this year, but it was a close fight between all three. Absolutely outstanding year.

Totally agreed, sadly it was up for vote and not just individuals.

This also reminds me that I'm still rather in the beginning in Skyrim and haven't played Uncharted 3 for ages although I own it almost since the release! Good that I'll have some holidays soon that will hopefully give me the time to plaaaaay! ^^

And thanks for sharing that link! Was interesting to read! :-)

TAC Pro For PS4 Allows For A PC Gaming Experience

The PS3 Was The Top Selling Console In France In 2011

Innersloth shares Among Us 2022 update roadmap